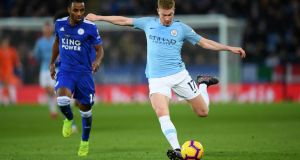 Kevin De Bruyne came through Manchester City training on Wednesday and could play against Liverpool in the Premier League on Thursday. Photograph: Shaun Botterill/Getty Images

Kevin De Bruyne is back in contention for Manchester City’s pivotal Premier League clash with Liverpool after training positively on Wednesday morning, having missed the last game due to a muscle problem.

City host Jürgen Klopp’s side hoping to close the gap to the leaders to four points. De Bruyne had only recently returned from a second serious knee injury this season when being forced out of Sunday’s 3-1 win at Southampton. In all he has managed just nine appearances, yet Pep Guardiola is optimistic the midfielder may start against Liverpool at the Etihad Stadium.

“He trained today but tomorrow [Wednesday] we need another check in the morning but he is much better,” said the manager, before stating Thursday’s match is a big chance. “The reality is clear – we are seven points down so it will be the second game of the second leg [of league matches], so there a lot of points to play for.

“I have the feeling it is a big opportunity for us to reduce the gap. My focus is the same. Everybody asking what will happen if you lose, but we are going to try. It is our chance to fight for the Premier League.”

City have failed to beat Liverpool in their previous four meetings though the Catalan pointed to last term’s corresponding league fixture.

“Last year we beat them 5-0 here. It is Liverpool, the best team in all England in history,” said Guardiola. “We can beat them. I know today nobody trusts us but it is what it is. They are in the moment the best team in Europe, in the consistency, the way they control the details in their game.

“We are going to focus on what we have to do to win the game. Everyone is talking if we lose, but we can win.” - Guardian