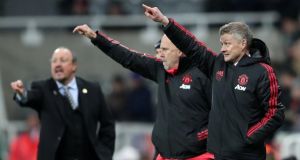 Ole Gunnar Solskjaer has admitted he will not want to leave Manchester United after matching Matt Busby’s record of winning his first four games as manager.

Unlike Busby, the Norwegian has been placed in interim charge at Old Trafford following Jose Mourinho’s exit, but Wednesday night’s 2-0 win at Newcastle extended his perfect start.

Asked if he would not want to leave in May, he said with a smile: “Of course I won’t, I don’t want to.

Second-half goals from substitute Romelu Lukaku, who scored with his first touch after Magpies keeper Martin Dubravka spilled Marcus Rashford’s free-kick, and Rashford were enough to take the points at St James’ Park.

However, Solskjaer was in no mood to rest on his laurels after matching the feat of his famous predecessor, remembering his United manager Alex Ferguson’s approach to winning runs.

He said: “That will be in the books, but it’s nothing that I’m thinking of. I’m just thinking about the next game because if you win four, you can win another four at this club. That’s the challenge and that’s the standard that we’re known for.

“The gaffer used to challenge us on them and of course when we’ve won four, you can go onto the next four and think about them.”

If the win on Tyneside was rather more prosaic than what had gone before, Solskjaer was able to revel in the individual performance of England striker Rashford, who has shone in the key role he has handed him.

The Norwegian said: “He gets kicked and he gets tackled, he goes for headers, he wins, he challenges, he runs — he is going to be a top, top number nine, definitely.

“But then again, we’ve got Rom, so sometimes he’ll play on the right, sometimes on the left, sometimes through the middle. He’ll get enough games.”

Solskjaer’s delight was in stark contrast to the mood of opposite number Rafael Benitez, who saw all his team’s hard work ultimately count for nothing as a result of errors.

Benitez said: “On these kind of nights, you have to be disappointed in the way that you lost because if the other team is doing really well, much better than you, you say ‘Fair enough, that’s it’.

“For 85 minutes, we deserved something more than just to lose the way that we lost. The message is clear and consistent: in the final third, the accuracy of the final pass, the assist, the final decisions, that is the key if you want to score more goals.”