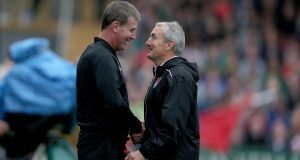 The fact they have been kept apart in the semi-finals of the FAI cup means the rivalry between the top two sides in the Airtricity Premier Division may well persist until the last game of the season again, but the title will be all but decided this Friday evening if Cork City do not beat Dundalk at Turner’s Cross, Cork, (kick-off 7.15pm) with even a win for the home side probably only enough to delay the inevitable.

The three previous meetings this year have gone the way of the home side, but after dropping eight points in their last three league games, a home win on Friday night would effectively leave Stephen Kenny’s Dundalk side in need of nine points from their last five games, something that should be well within their capabilities.

If Cork manager John Caulfield cannot coax a much better performance out of his side than last week at Dalymount, City will do well not to be nine points adrift by the end of the evening and if that happens the visitors will head home knowing that just winning their game in hand would be more or less enough to regain the title.

They have, to be fair, upped their game with a run of 13 straight league wins providing the backbone of what is at present a 2.43 point per game return, higher than in any of their three title-winning seasons under Kenny despite the fact that there are two fewer weak teams to be played this season.

Cork, by contrast, are down significantly on last year, from 2.3 to 2.16, although they had actually been slightly improved until these past three games.

“We need to put a huge performance in,” says the City boss. “We just have to concentrate on putting a performance in and getting the three points. Obviously the guys were disappointed after last Friday [when they lost 4-2 to Bohemians]. We were really poor and made a lot of mistakes. The most important thing, though, is that you have to bounce back, and all week we have been working on that and giving a proper performance.”

Caulfield’s scope for making changes to a defence that had a particularly poor night in Phibsborough is limited by a doubt about the fitness of Alan Bennett, while one of the side’s better performers in the game, Karl Sheppard, also faces a fitness test in the run-up to kick-off.

The league leaders are again without either Stephen O’Donnell or Karolis Chvedukis, who the club has confirmed has undergone an ankle operation and will not play again this season, but they are in good shape otherwise after back to back wins over Limerick.

Much like Dundalk, but at the other end of the table, Tommy Barrett’s men head to Bray just needing to avoid a defeat that might leave them open to an extraordinary turn of subsequent events.

“Not to lose is important,” says Barrett. “Bray would have a bit of hope if they won and anything can happen at this time of season; they’ve got Sligo and Derry to come, even Bohemians mightn’t feel like they have too much to play for.”

His own side just needs to scrape through to the play-offs then start with a clean slate.

“It’s difficult,” he admits. “It’s a young team and most of them have never been in this position before, and the play-offs wouldn’t be easy, but we would hope at that stage that the fact we have been playing tougher opponents every week would stand to us a bit.”

Barrett has Killian Cantwell available to start again, and hopes Billy Dennehy might shake off a back problem, Eoin Wearen and Darren Dennehy are both gone for what is left of the season.

Waterford, who can, however briefly, go above Shamrock Rovers in the race for fourth place with a win over Sligo, have Dave Webster suspended and Derek Daly injured. John Martin (shin), Bastien Hery (achilles) and top scorer Courtney Duffus (groin) are all doubts.

David Cawley misses out for Rovers through suspension but Rhys McCabe returns from suspension.