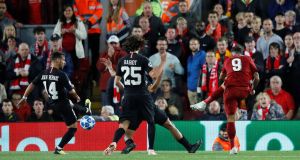 It wasn’t until the 83rd minute that Kylian Mbappé decided it was time to introduce himself to Anfield properly and at that stage PSG must have imagined they had salvaged a draw. Unfortunately for them, Roberto Firmino had other ideas and the game was deep into stoppage time when the substitute provided the decisive moment with an emphatic right-footed drive.

Until that point, it had seemed as though they might not fully appreciate why Anfield, without exaggeration, might currently be the most challenging stadium for any away side in the Champions League. Overall, however, it was a deserved victory for Jürgen Klopp’s team on a night when they seemed determined to show that their adventures in this competition last season did not have to be a one-off.

Liverpool played as if affronted by the suggestion that this might be one of the rare occasions when the opposition has the better selection of attacking riches. Daniel Sturridge, with the opening goal, made up for the fact that Firmino was only deemed fit enough to be on the bench.

James Milner’s penalty had given Liverpool a 2-0 lead and the home side showed their personality after Mbappé had completed PSG’s comeback. Liverpool, once again, had played with fearlessness, resilience and ambition.

Another team might have felt a dash of conservatism was required given that the opposition included Mbappé on the right, Neymar on the left, Edinson Cavani through the middle and Angel Di María never too far away. Not the team from Anfield, though. Liverpool’s triumphs last season were based on their ability to rush opponents off their feet, attack in numbers and inflict the damage, if possible, with scoring blitzes of twos and threes rather than single goals.

They set off with exactly the same intentions and though Sturridge might not have the energy of Firmino, his goal was the continuation of some encouraging performances in pre-season. This was the first Champions League start of his five-and-a-half years at Anfield and he justified his selection with the headed goal from Andy Robertson’s cross that, briefly, turned down the volume on the boisterous corner of Parisians who were congregated at the other end of the ground.

That was after half an hour and it is amazing how often Liverpool’s opponents in this competition concede a goal in front of the Kop, take too long shaking their heads clear and quickly let another one in. Juan Bernat’s challenge on Georginio Wijnaldum for Liverpool’s penalty was a clear sign that PSG were rattled. It was not a wild challenge, just a risky and slightly unnecessary one. Milner, who had a fine game, slotted the penalty past Alphonse Areola, aiming his shot to the goalkeeper’s left.

Against lesser opponents Liverpool might have regarded a two-goal lead, 36 minutes in, as an open invitation to turn a win into a rout. Yet even when Klopp’s men were on top there was always a lurking danger. Neymar for starters.

The Brazilian had introduced himself to Anfield with a body swerve to glide away from Trent Alexander-Arnold and then a slaloming run to go past, in order, Jordan Henderson, Sadio Mané and Milner. The Kop enjoyed it later in the first half when Mané went past the Brazilian with some showboating of his own. But it was also clear that PSG had the personnel to think a feat of escapology was possible.

Their riposte came five minutes before half-time. Di María supplied the cross from the left and Cavani’s attempt at an overhead kick connected with only thin air. Perhaps that momentarily confused Robertson because when the ball reached Liverpool’s left- back he could not adjust in time. The ball bounced off the defender and Thomas Meunier, venturing forward from his right back position, hooked a splendid left-foot volley past Allison to put the Ligue 1 champions in a much stronger position going into the interval.

Perhaps it would have been a more precarious second half for Liverpool if Mbappé had done more to justify his reputation as the world’s most exciting teenager. As it was, there were only fleeting glimpses of his menace and it was not until eight minutes after the break that he managed to get past the quick, alert Robertson for the first time.

Di María’s link-up play with Neymar was a prominent feature. As a front three, however, Neymar, Cavani and Mbappé still looked a work in progress. Liverpool were determined not to sit on their lead and there were prolonged celebrations after Mohamed Salah stabbed in a loose ball, believing he had made it 3-1 only for the referee to signal that he had not missed Sturridge’s studs going into Areola’s groin after all.

It was the correct decision and when Sturridge wasted another headed opportunity shortly afterwards Mbappé’s late contribution almost made that a costly miss. - Guardian service