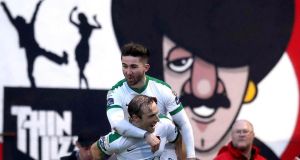 A crowd of 2,214 at Dalymount Park saw the home side have the better of the early exchanges with City goalkeeper Mark McNulty making two good saves to deny Bohs’ Oscar Brennan on six and ten minutes.

City were slow in starting but were soon up to the early tempo set by Bohs and took the lead on 40 minutes. Bohs failed to clear a City corner and the ball fell for Sheppard to volley into the top right corner from 25 yards.

Georgie Poynton went close to levelling for Bohs on 56 minutes but was blocked by McNulty at his near post.

Buckley made sure of the win on 87 minutes with a close-range finish from a Seán Maguire assist.