Bohemians show no mercy as they hit sorry UCD for 10 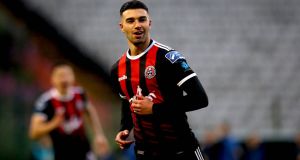 Daniel Mandroiu scored a hat-trick for Bohemians in their 10-1 rout of UCD. Photograph: Ryan Byrne/Inpho

Torrential rain descended on Dalymount Park late on Friday evening but by then a deluge of goals had already broken the spirits of a young UCD side.

The Students had been on the winning side when the sides met in UCD just a month ago but they were taken apart by a clinical Bohs team on a revenge mission.

Grant had already hit the post when he landed a cross on the head of English striker Wright to glance home his first goal in Bohs colours.

Levingston doubled the lead just before half-time with a rocket from the edge of the box and Grant chipped home the third within a minute of the restart.

Mandroiu got his first direct from a free kick after Grant had been fouled on the edge of the box and within a minute Wright had raced clear to clip home his second.

Wright got his hat-trick at the second attempt after Tom Murphy had saved his penalty before Tierney scored the goal of the game with a lovely flick in off the bar.

Mandroiu added two penalties in quick succession, both conceded by keeper Murphy, to rub salt in the wounds before Wright headed home a fourth from close range.

1 Some Premier League clubs set to face three matches in seven days
2 Royal Portrush: Golf clubs ‘in real distress’ as eyes turn to 2021
3 Increase in membership a plus for adapting golf clubs
4 French clubs still expected to complete European games as Top 14 shelved
5 ‘A radical departure’: Who are CVC and what are their plans for rugby?
Real news has value SUBSCRIBE