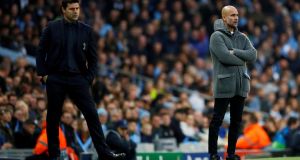 Mauricio Pochettino’s patience wore thin at suggestions that he, perhaps more than most managers plying their trade in the Premier League, may best know how to rattle Pep Guardiola.

Yes, a decade ago, he had achieved the first win of his coaching career by steering Espanyol to an improbable success across the city at Guardiola’s all-conquering Barcelona. True, back in the autumn of 2016, he had also inflicted the first defeat to be endured by Guardiola since his arrival in English football.

There was also no escaping the reality that, before their trip to the Etihad Stadium, Tottenham are the only side to have defeated Manchester City since the end of January, courtesy of Heung-min Son’s goal in the first leg of the Champions League semi-final in early April.

The champions are not due to meet another member of last season’s elite six until a collision with Liverpool in November, so it is easy to see why the rest of the division might be pinning their hopes on Pochettino conjuring a way to stall City’s progress.

If Pochettino’s masterplan is wrecked today, it is conceivable City’s winning streak may have extended to a record 25 league games by the time they arrive at Anfield.

So it is all on the Argentinian.

“I hate this, I promise, when it is [billed as] ‘a fight between one person and another’, rather than a competition between teams,” he said, rocking back in his chair in mock exasperation on the eve of Tottenham’s trip north.

“It is not me against another coach. It is not me and Pep. The best way to see who is ‘the best’ would be to put these ‘brave managers’ in a ring and fight, like Anthony Joshua.

“I look so brave on the touchline because I know that is never going to happen, so I shout and everything. That is the point; I love to compare my team with another team.

“Tottenham was the last team to beat Manchester City, for sure. If you play an opponent, you care about their skills and analyse their strengths and weaknesses to find a way to beat them, but we have a philosophy.

“We have a way we love to play. We are brave, we try to move forward, we try to think about us before we think about the opponent. I don’t know if that is the key to sometimes beating a team like Manchester City.”

That willingness to be bold and take the game to the champions, where others shrink and vainly attempt to smother with blanket defence, would appear to be one explanation for Spurs’ relatively encouraging record in these fixtures.

The tactic is risky. Pochettino has endured resounding defeats to City in the past few years, too, and there are few teams who can resist when they click fully into rhythm.

Yet his own team’s forte remains its fluent creativity and bite up front. They scored three in the second leg at the Etihad Stadium to prevail, after that excruciating VAR check, on away goals even without the injured Harry Kane.

A few days later, they counted themselves unlucky to have succumbed to Phil Foden’s early winner having created presentable opportunities in a lower-key Premier League rematch at the same venue.

They will be blunted slightly this time round by the absence of the suspended Son and with Dele Alli only recently returned to training outside after hamstring trouble.

Then there is the dilemma currently posed by Christian Eriksen. The midfielder, now into the last year of his contract and unlikely to agree new terms having set his heart upon a new challenge, began last Saturday on the bench, but Aston Villa were only prised apart once he had been summoned on after the break.

Tottenham duly created twice as many chances during his 26-minute cameo than they had managed without the playmaker.

Pochettino insisted the 27-year-old’s contractual status is neither here nor there when it comes to first-team involvement and the Denmark international could begin today.

But the prospect of Eriksen – or even Danny Rose, who had been omitted from a pre-season tour of Asia “to explore prospective opportunities with other clubs” – still being lured away before the closure of the transfer window in rival European leagues is clearly disconcerting.

The hope was all business, in and out, would have long since been concluded. The manager, at present, cannot properly plan for a campaign that is already upon him.

“We will see what happens between now and September 2nd [when the deadline passes in Spain, France, Germany and Italy],” he said.

“Like we can change our minds, a player can change his. So, until then, it is difficult to say whether this will be the ‘bravest’ group of players I’ve had here.

“The team is not settled how I expected it to be. We are still working in trying to make sure it is finished come 2nd of September.

“That will be the moment to have a big conversation with the whole squad and settle the principle. Until then, things can still happen and it is not in my hands. We need to wait and hope there are not too many changes or not too many problems for us.”

City, seeking a 16th league win in a row, will pose issues of a more immediate kind. – Guardian