Guardiola hints at lack of warmth between him and Pochettino 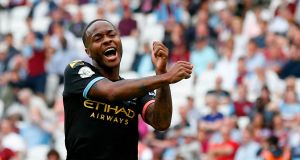 Raheem Sterling: ‘When he’s in front of the goal, he puts it in the net, so he can do it,’ says Guardiola. Photograph: Ian Kington/AFP/Getty

Pep Guardiola has suggested Mauricio Pochettino refuses to take his admiration for Tottenham’s manager at face value, suggesting a discord remains between them.

Pochettino bridled when Guardiola described Tottenham as “the Harry Kane team” in 2017. While Guardiola claimed he merely meant the striker was scoring consistently for Spurs he hinted that warmth can still be lacking between him and Pochettino.

Asked to assess Pochettino’s record at Spurs, he said: “Overwhelming, extraordinary, I said many times. I don’t know if Pochettino receives as many compliments [from] other managers like me – I don’t think so.

“My opinion about him is high standard, even if he doesn’t believe me, so he’s a top manager. They are a strong team, a good team.”

City play Tottenham at the Etihad Stadium on Saturday evening, having defeated them home and away in last season’s league games, though Spurs knocked Guardiola’s side out of the Champions League on away goals in April.

Guardiola believes Raheem Sterling can score 35 goals this season. The forward managed a career-high 25 in all competitions last term and began with a hat-trick in the 5-0 win at West Ham, having also scored in the Community Shield win over Liverpool.

“I never spoke with Sergio Agüero or Gabriel Jesus or Raz, with any of the people up front, about what are their dreams and targets. I don’t know, honestly. They are happy when they are scoring goals, all the people who play in the front line. So hopefully he can score goals. I think goals are a consequence of the way we play – their mood, how the team’s playing, no injuries.

Bernardo Silva was an unused substitute at West Ham despite being one of City’s top performers last season. The Portuguese midfielder is one of many selection dilemmas for Tottenham’s visit, with Agüero and Fernandinho also not featuring in last Saturday’s XI. “That is going to happen every weekend, every game,” Guardiola said.

“If everybody is fit then other players don’t play. The quality of the team is good. We have to think what is best about our team for these opponents.”

Rodri, a £62 million summer buy from Atlético Madrid, was impressive on his debut last Saturday. “He has to play better, him and everybody,” the manager said. “That’s why we train, to see what we can do better. Rodri has potential but he is new. There are many things for him to see what we want to do. He’s smart and he will get it. Like everyone, he can do better.”

Leroy Sané is yet to have an operation on his knee after Guardiola had said it would occur earlier this week. “I think it’s this weekend,” he said. – Guardian