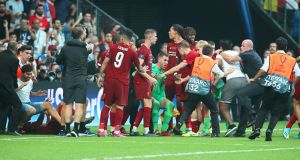 Liverpool’s goalkeeper Adrián being helped by teammates after a pitch invader rushed into him in Istanbul. Photograph: Tolga Bozoglu/EPA

From zero to hero? Andy Lonergan will certainly be hoping that is the case should he be handed a place in the Liverpool side against Southampton at St Mary’s on Saturday.

It would mark an extraordinary final chapter for a journeyman goalkeeper in the twilight of his career, one that would mean he would become the oldest English man, at 63 days short of his 36th birthday, to make his debut in the Premier League this century.

Lonergan could be handed a start after it was revealed by Jürgen Klopp that Adrián was suffering with a swollen ankle having being hit by a spectator who ran on to the pitch in Istanbul following Liverpool’s Super Cup win against Chelsea.

The Spaniard was only playing because of the injury to Liverpool’s regular No 1, Alisson, collected in the 4-1 victory over Norwich and now, in the space of a week, Liverpool have a goalkeeper crisis on their hands.

Adrián may yet feature against Southampton – the Spaniard is “hopeful” of being fit enough to take part – but should he miss out, Lonergan will get his chance, completing a quite remarkable rise to prominence for the goalkeeper, who has made 401 senior appearances for 10 different clubs since his debut for Preston in 2000 and was only signed by Liverpool as short-term cover following Alisson’s injury and having been part of the club’s pre-season tour to the US.

Liverpool have written to Uefa seeking an explanation as to how the supporter managed to evade security and injure Adrián in Istanbul.

The supporter also struck Joe Gomez but while the Liverpool defender is fit to play at St Mary’s, a late decision will be required on Adrián’s fitness.

Liverpool have contacted European football’s governing body over the seriousness of the incident, and the frequency of pitch invasions in finals hosted by Uefa, which often disciplines clubs over identical security breaches. There had been an earlier pitch invasion during the game against Chelsea and in Liverpool’s past two Champions League finals against Real Madrid and Tottenham.

Jürgen Klopp said: “When we were all together a supporter jumped on us. He was chased by some security guys, slipped and kicked his ankle. Crazy. Yesterday it was swollen. I saw on the plane that it is not cool. Adrián wants to play. I think he can but this is still a serious thing and we have to look at it.”

Klopp is already without Alisson with a calf problem, while third-choice Caoimhin Kelleher (20), from Cork, has only recently resumed training after a broken wrist.

Klopp is concerned at the regularity of pitch invasions at his club’s matches. He said: “There was only Liverpool fans there pretty much, so it probably was one. What can I say? There is no doubt about how much we love our fans but if they could all stop doing that, because that’s the worst example I have heard about.

“It happened against Manchester City in the Community Shield when someone was running on the pitch and against Norwich someone ran on the pitch.

“I like that we don’t have fences but that means a lot of responsibility for supporters. If one supporter cannot hesitate or stop himself, then supporters around him should do it.”

The Liverpool manager said the growing problem of pitch invasions is a problem everyone in authority in football needs to take seriously.

Klopp said: “We have the Adrián incident which is serious for us but if you ask anyone involved in football if you find it funny that someone runs on the pitch, pants down, half-naked, no one would say, ‘Oh yes, that is really nice’. You never know who it is there.

“Before the season at the Premier League meeting they told us not to get involved but we are all human beings and if they get close you do not know the person and for us it is not funny. It is still happening. It looks like it is happening a bit more often.” – Guardian