A season like no other: The key games that helped Shamrock Rovers secure an 18th title 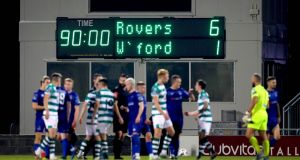 A view of the final score from Shamrock Rovers’ win over Waterford at Tallaght Stadium on September 21st. Photograph: Ryan Byrne/Inpho

It might not have been the way that anyone at Shamrock Rovers would have chosen to clinch the club’s 18th league title but as next best things go, they would probably take a home defeat for Bohemians by a side struggling to avoid relegation.

Had a couple of positive coronavirus cases not intervened, Stephen Bradley’s side would have had the opportunity to get themselves over the line by now. But the fact is that the quality they have shown at times along with their consistency over the course of what has been a heavily disrupted and shortened season means that it has been, for quite a while now, a matter of when this title would be theirs rather than if.

With four games, almost a quarter of their season to play, they are champions because they have won 12 of 14 matches and drawn just two. A couple of their key wins came very early on but since beating Bohemians for a second time, they have been focused enough to make it clear they would not slip up in the way required to allow their rivals back into the race.

Bohemians won four straight games before dropping two points at Dundalk and that left absolutely no room for error. Defeat by Finn Harps may have been a slightly surprising way for the race to be concluded but it had been clear long before kick-off that the match’s real significance lay at the other end of the table.

Here is a handful of the games in which the title was decided . . .

It was a horrible day to kick off a campaign in which they were looking to make up a lot of ground on last year’s winners Dundalk, but beating their cross-city rivals Bohemians would represent a major statement.

Storm Dennis reduced the pitch to a bit of quagmire which reduced the game to a bit a scrap but Rovers played well given the circumstances and never gave up on winning a game in which their hosts were holding out for a draw after Andy Lyons had been sent off.

In the end, the very end, Aaron Greene pounced to score a 93rd-minute winner from close range after James Talbot had parried an Aaron McEneff shot. If you didn’t know the history, you might have thought from scale of the celebrations that they had already won the league.

This game will go down as one of the highlights of the season generally with a packed house at Tallaght witnessing a compelling contest between last season’s champions and a side utterly determined to take their crown. It might well be the night that they really started to believe it would happen.

Dylan Watts gave Rovers the lead but after goals from Jordan Flores and Pat Hoban they found themselves needing to score just to avoid a potentially costly home defeat. Roberto Lopes got the equaliser but it Jack Byrne’s left-footed curling strike for the winner that had people talking afterwards.

There was genuine excitement regarding the prospect of there being another three games like this but two were lost to coronavirus and by the time Stephen Bradley’s side travelled to Oriel Park, Dundalk were out of contention and completely distracted by Europe.

Having beaten Finn Harps at home in their first game back after the long lay-off, the league leaders were severely tested at the Brandywell. City led from the 36th minute thanks to a slightly fortuitous Walter Figueira strike and the hosts worked hard to hold on to their advantage.

Their luck ran out 12 minutes from time, though, when a cross struck defender Colm Horgan’s head and went in after which the effort of it all took its toll and they faded as the Dubliners pushed for a winner. Not for the first time, the fitness of the Rovers players told and Roberto Lopes poked home the goal they needed from six yards in the 82nd minute.

Having won four on the trot after the league’s resumption, Bohemians were very much in the hunt when they went to Tallaght for what was now going to be the last league meeting of the two sides.

They suffered an early setback when Stephen McGuinness parried a Graham Burke cross and Andy Lyons tried to clear the danger at the far post. The young defender was unaware that Danny Lafferty was behind him as he turned and the ball was deflected straight in.

The visitors had a couple of penalty claims dismissed and some good spells of pressure but Rovers had their moments too and held on well to win the game. At the end, the mood in both camps clearly suggested that everyone believed the result would inevitably have a very major impact on the outcome of the title race. It was now very much Shamrock Rovers’ to lose.

Waterford came into the game off the back of a 2-0 win at Dalymount which in turn followed an impressive 3-0 defeat of St Patrick’s Athletic and suddenly Europe was looking like a very realistic prospect. Rovers, meanwhile, had scored once in their previous three league games and though they had got three the week before in the cup, this looked like a test in the making, of their nerve as much as anything.

They did more than enough to silence any remaining sceptics. Though it took until the 41st minute for Aaron Greene to open the scoring, the home side ended up going on the rampage. There six different scorers by the end including an injury-time strike for young Dean Williams but all the team’s figures had a major hand in the victory as a team that knew they were champions in the making simply blew their opponents away.

This was to be their last game, as it turned out, before the title was clinched and Sligo, like Waterford before them, travelled to Tallaght with enough of a run of form behind them to feel they might take something away with them to help their own European aspirations.

From the moment that Ronan Finn opened the scoring, with what is for him these days a rather rare goal, there was only going to be one winner.

The highlight of another good night for the Dubliners came seven minutes before half-time when Jack Byrne picked out Graham Burke with a brilliant angled ball that put his team-mate clear into the area. Burke’s control was impressive too as he took a brilliant touch before slipping the ball home. Byrne got one himself before Dylan Watts rounded off the victory. The next time they all stepped out on the pitch, it would be as champions.