All in the Game: Zlatan bags a derby day brace on Covid return

Slovenia’s Under-21s have an issue with their gaffer, Ronaldo gives some virus advice 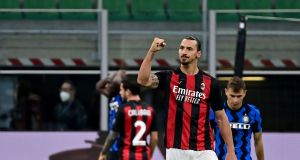 Slovenia Under-21s have an issue with the gaffer

The week’s most excellent dispute between a coach and his players: The runaway winner is the one that has blown up between Slovenia’s Under-21 coach Primoz Gliha and his squad, as revealed by football writer Richard Wilson.

It’s hard to know where to start, really, but among the 13 complaints listed by the players in a letter to their association, as detailed by Wilson, were: Gliha “banning players from sleeping on transport to away trips”, “banning goal celebrations”, “having just some random turn up and lead the pre-match warm up vs Italy”, “banning players from sleeping with the door shut” and “making players play vs Hungary without having eaten since breakfast”, the last one prompting far too many ‘playing Hungry v Hungary!’ replies.

And complaint number 13 alleged that Gliha let himself in to the room of captain Jan Mlakar and his room-mate Jakob Novak at 11.15pm at night and told them they were both being sent home because they had refused to hand over their mobile phones, as Gliha had ordered the whole squad to do. “Mlakar was escorted off the premises and forced to pay his own bill.”

The upshot is that the players have told their association that they will not play for the team until Gliha is fired. The association say they are studying the letter. Probably with their jaws at ground-level.

“It was a bad idea for the coronavirus to challenge him, he is mentally stronger than all. He’ll play the derby with a cigarette in his mouth, trust me.” Christian Vieri predicting that Zlatan Ibrahimovic would return from his spell out with Covid to play in the Milan derby. He did too - scoring both goals in a 2-1 win. Smokin’ hot.

0 - That’s how many clean sheets San Marino had managed in away games in their entire footballing history .... until last week. After that 0-0 against Liechtenstein, goalie Elia Benedettini will never have to buy a pint again.

“Joe Hart is still playing. Why is he not the number one? He is only 33 years old. He’s probably in his prime.” Peter Schmeichel hinting at a slight lack of faith in Jordan Pickford by suggesting Spurs’ reserve goalie should be first choice for England.

“In these situations, you sometimes need to be taken out of the oven.” Rio Ferdinand suggesting that an overcooked Harry Maguire needs to be rested for a bit.

“I always say, if I would be an animal, I would be an octopus.” Arsenal new boy, Thomas Partey. As The Guardian so cruelly noted, he was thus “likening himself to a small, spineless being that mostly stays hidden away”. Yes, the rascals had poor Mesut on their minds.

After testing positive for Covid last week, Cristiano Ronaldo took to Instagram to reassure his fans that he was doing well and to advise them on how to build up “a strong immune system”. He recommended getting 20 to 30 minutes of sunshine every day, always having a good night’s sleep, taking plenty of exercise and lots of vitamin C, D and the like.

“Eat well, lots of vegetables, lots of greens and don’t abuse sweets,” he said. “I wish you all health and urge you not to be afraid of the virus, but to respect it.”

Alas, in one case, that piece of advice fell on deaf ears. “If Cristiano Ronaldo is the one who has to wake the world up, I have to say that this Portuguese really is an envoy from God! This pandemic is the biggest fraud I’ve seen since I was born! Enough fooling the entire world! Open your eyes, please!”

Who was the Covid-denier? Katia Aveiro .... his, eh, sister.

We trust that you’ve been enjoying extracts from the incomparable Nicklas Bendtner’s autobiography of late, but while we’d also guess that you might envy aspects of the high life he has enjoyed through his 32 years on earth, other parts of it you could do without. His life, after all, has been exceedingly complicated.

A case in point: when one of his very many former girlfriends made contact with him. “She claims I’ve got her pregnant. She says there’s a price if she’s going to do something about it. ‘And what does that mean?’ I ask. ‘It means you’ve got to pay for a pair of new boobs for me. I want my t*****s fixed,’ she says. So I end up paying for her trip to the cosmetic surgeon.”

Never a dull moment with Nicklas.