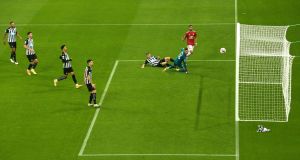 Bruno Fernandes made amends for a penalty miss with a superb finish as Manchester United left it late to surge to victory at Newcastle.

Fernandes capped a superb 86th-minute attack by clipping the ball inside the far post after earlier seeing his spot-kick saved by Karl Darlow, his first miss in a United shirt after 10 successful attempts.

The visitors, who had trailed through Luke Shaw’s early own goal and got themselves level courtesy of Harry Maguire’s 23rd-minute header, wrapped up a 4-1 win in stoppage time with a rocket from full-back Aaron Wan-Bissaka and a well-deserved goal for Marcus Rashford.

It was no more than they were due after piling the pressure on their hosts for much of a contest which looked to be heading for a draw until the late display of fireworks.

Newcastle could hardly have got off to a better start when they took the lead with less than two minutes on the clock after Callum Wilson turned marker Victor Lindelof on halfway and slid the ball into the path of Allan Saint-Maximin.

The Frenchman cut inside to feed Jonjo Shelvey, who picked out the run of full-back Emil Krafth on the right and in his efforts to cut out the cross, Shaw could only divert the ball into his own net.

United’s response was concerted and it took a good 14th-minute block from Federico Fernandez to prevent Darlow from having to deal with Rashford’s powerfully-struck drive.

Fernandes saw a 19th-minute effort ruled out for offside after a neat exchange of passed with Daniel James, and Juan Mata warmed the keeper’s hands with a stinging drive four minutes later as the home side rode their luck.

However, it ran out from the resulting corner when Maguire climbed to power Mata’s corner into the net with Darlow powerless to resist.

The visitors might have been behind once again on the half-hour when Allan Saint-Maximin cut inside full-back Wan-Bissaka and fired towards goal, where De Gea managed to beat his effort away before colliding painfully with the upright.

Darlow had to tip away Wan-Bissaka’s 36th-minute cross as it arced dangerously towards goal and parry a Rashford effort either side of Jamaal Lascelles’ goal-line clearance from the England frontman with Ole Gunnar Solskjaer’s men pressing once again.

Newcastle set visibly higher up the pitch after the break after being pushed back deep inside their own half for much of the opening 45 minutes, and they would have restored their led within six minutes had De Gea not managed to claw Wilson’s toe-poke off the line after a mesmerising Saint-Maximin run and cross.

United should have gone head after referee Craig Pawson was advised to take another look at Lewis’ challenge on Rashford, but Darlow dived to his right to keep out Fernandes’ 58th-minute penalty before Shelvey cleared Maguire’s header off the line from the corner which followed.

But United snatched victory with a late flurry, going ahead four minutes from time when a move which was started by substitute Donny Van De Beek was ended with a delicious finish by Fernandes after he had run on to Rashford’s clever back-heeled pass.

Wan-Bissaka and Rashford both helped themselves in stoppage time as the Magpies finally wilted in the face of a storm.