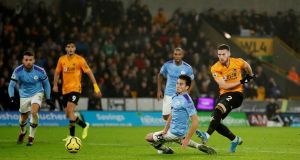 In a contest of wild drama Manchester City thought they had survived everything: Ederson was sent off and Raheem Sterling missed the same penalty twice but still the champions established a two-goal lead. But Wolves fought back thanks to goals by Adama Traoré, Raúl Jiménez and Matt Doherty. And with that City’s grip on the title looks even more flimsy than before. Liverpool are 14 points ahead with a game in hand.

City’s plans ran into a complication before kick-off, as illness afflicted Gabriel Jesus and forced Pep Guardiola to draft Sergio Agüero into the starting lineup. An aristocrat’s problem if ever there was one but City had wanted to ease their record goalscorer back into action after a thigh injury and would have preferred not to make this the match in which he made his first start for over two months.

With a trip to Anfield to follow in less than 48 hours, this was the start of a pitiless examination of Wolves’ resources.

That this was going to be a big test became clear within 10 seconds, that being how long it took for Raheem Sterling to scamper dangerously into the home box. City, then, were at full throttle. Conor Coady did well to dispossess him on that occasion. City began zipping the ball around in familiar fashion but Wolves are nothing if not well organised and they tracked City’s beguiling movement well for the opening 10 minutes.

Then Wolves started to bare their own teeth, Traoré reminding City of his menace by marauding down the right. In the 12th minute Guardiola’s plans suffered a more serious blow. First Coady exposed City’s defensive frailty by flighting a pass over them from deep and into the path of Diogo Jota. Ederson hurtled out of his box but Jota was faster than he had calculated and the goalkeeper ended up clattering him on the shoulder. The referee, Martin Atkinson, delivered the last card the goalkeeper would have wanted to receive this festive season.

As Ederson departed, so too did Agüero, sacrificed so that City could bring on their replacement goalkeeper, Claudio Bravo. If City grumbled about the red card, an extraordinary decision soon went in their favour as, in the 22nd minute, Riyad Mahrez fell spectacularly in the box following contact from Leander Dendoncker. The infringement was not apparent to most people in the stadium but this is the age of mass surveillance: VAR spotted Dendoncker treading on Mahrez.

Rui Patrício saved Sterling’s penalty but then, again on the recommendation of VAR, the referee ordered it to be retaken for encroachment. Patrício saved Sterling’s second attempt, too, but was helpless to stop the relieved forward from stroking in the rebound. A few bozos in the stands vented their anger by flinging objects on to the pitch. The rest of the crowd just cursed VAR, especially after the giant screen showed a replay of the supposed foul on Mahrez.

City strained every muscle to reach half-time with their lead intact. Fernandinho excelled as City blocked shots and diverted crosses. Bravo played his part by saving a Raúl Jiménez shot from the edge of the box.

Guardiola had to make another adjustment during the break, as Mahrez was replaced by 18-year-old Eric Garcia. Wolves soon raised the tempo as Jimenez and Jota cut through City’s defence. Jota flicked the ball over the bar after running on to the Mexican’s lovely looped pass.

Soon Sterling produced an even finer chip. After being released by De Bruyne, Sterling ran into the box and did what he had been unable to do from the penalty spot, beating Patrício with a deadly dink.

That gave City an extra cushion but they could not sit comfortably for long. Five minutes later Sterling lost possession in midfield to Rúben Neves, who helped the ball on to Traoré, whose devastating directness City have learned to dread. After scoring twice at the Etihad, he slashed City’s lead here by ramming a long-range shot into the bottom corner.

Wolves attacked in waves but City stood firm. Guardiola buttressed their defences by replacing De Bruyne with Ilkay Gündogan. Traoré almost found a way through again anyway but was foiled by Bravo. Then City enjoyed a let-off as Romain Saïss met a free-kick by Moutinho but nodded wide from six yards. Moments later, from a similar position. Rodrigo made a critical intervention at the back post to stop Doherty from scoring.

As City clung on, Benjamin Mendy tried to shepherd the ball out of play near the byline, a decision that Traoré soon made him regret. The Spaniard shunted the defender aside before crossing for Jiménez to slide the ball into the net from close range. Doherty then stuck a superb winning goal, exchanging slick passes with Jiménez before firing into the net. In the dying seconds Sterling struck a free-kick against the crossbar. There was to be no happy ending for City.