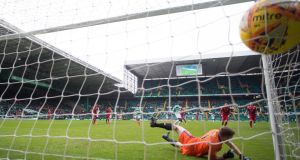 The 32-year-old German defender picked up a calf injury during warm weather training in Dubai in January, after his switch from RB Leipzig at the start of the transfer window.

Compper started his Hoops career with a pass straight to Ton attacker Gary Oliver but he was crowded out and there was little real danger from the visitors thereafter, although Jim Duffy’s Championship side impressed with their organisation and discipline.

Ultimately, a second-half double from Moussa Dembele, the second from a penalty, and a late strike from substitute Odsonne Edouard, on loan from Paris St Germain, eased the holders into the semi-final draw.

Ahead of next Sunday’s derby against Rangers, Rodgers was glad Compper had at last seen some action.

The Northern Irishman said: “It was a case of getting out there and getting a feel for the pitch and the supporters.

“I wasn’t so sure about his first pass but after that he regained his confidence.

“It is never easy, not matter how old you are or how experienced you are to get your first game for a club.

“But he needed to come in and play.”

Rodgers was also pleased that his side had come through the tie unscathed after the adverse weather had affected preparation.

He said: “It was a very tricky tie with the week we have had.

“The lack of training time showed in the first half, we weren’t at our standard in terms of our intensity, pressing and creativity.

“But you have to give credit to Greenock Morton they had some good organisation, good players in the team and I thought they worked really well

“We wanted to change it at half-time to be better for the second half.

“Odsonne came on to make a huge difference to the game. We slightly changed the shape of the team and we had much better control and intensity in the second half.

“I’m really pleased to get into the semi-final again this year.”

Compper is hoping to keep his place for the trip to Ibrox.

He said: “I’ll do my best during the week to try and make sure the gaffer puts me in.

“It is going to be very intense. We need to be ready from the first minute.”