Carlos Carvalhal: VAR can work in England as it does in Portugal 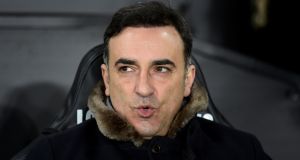 Swansea manager Carlos Carvalhal feels the controversial Video Assistant Referee system has the capacity to work, just as he believes it has done in his native Portugal.

The VAR system was once again the centre of attention during Tottenham’s 6-1 FA Cup replay win against Rochdale on Wednesday night as several decisions prompted confusion and controversy.

Spurs boss Mauricio Pochettino later claimed the stop-start nature of VAR could “kill the emotion” of the game, while former Premier League referee Mark Halsey highlighted the mistakes he felt were made at Wembley after video scrutiny.

But Carvalhal said: “It is a question of attitude. The VAR started in Portugal last season and I saw some games where it was very strange.

“But after that people adapted to it and I think there are a lot of positives in the decisions.

“The referees are very good, but in that moment they didn’t see something crucial to the game and it can cause a big damage in the final result.

“If we can have something that helps the referees to take a better decision I am happy to see it in a good way.

“I understand the protocol when a goal is scored and the referee must hear it in his ear whether it is valid or not.

“I know it is strange for the fans and the men analysing can also make mistakes.

“I am not saying it is good or bad but, if you ask me in Portugal now, I would say it is not a problem any more.”

Carvalhal, however, feels VAR needs speeding up and that supporters inside the stadium — as well as those watching on television — should be kept fully informed when decisions are taken.

“In Portugal the fans know what happens because the league gives some examples with the real image of the VAR,” Carvalhal said.

“It shows and represents what has happened and the referees can also be heard when they are talking.

“It is important to educate the people and give them a better understanding of what has happened.

“Maybe they can show an image to help the people at the stadium, that the video referee has seen something from this angle or that angle 10 seconds later and why he has come to a decision.”

Rochdale manager Keith Hill described the FA Cup replay against Spurs as “an education with VAR” and said he “enjoyed it” — for him, the confusion created was no worse than the chaos in his team’s defence.

But his was a minority view on another tough night for the Video Assistant Referee experiment, with his counterpart Pochettino, Spurs defender Danny Rose and several pundits criticising what they felt were long breaks in the game’s flow, often for marginal calls.