‘I am here for 21 years. I turned the whole world down to respect my contracts’ 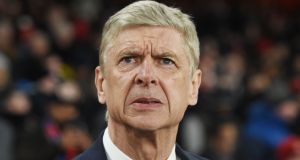 Arsenal manager Arsene Wenger says his focus is only on the team’s next match. Photograph: PA

Arsène Wenger has reminded his numerous critics that he “turned the whole world down to respect my contracts” at Arsenal, as he expressed his surprise and frustration that his job prospects remained at the top of the news agenda.

Arsenal’s 3-0 capitulation to Manchester City in Sunday’s Carabao Cup final represented the latest hole in the club’s season and kept up the chorus of disapproval regarding Wenger’s suitability to continue as the manager.

The 68-year-old faces an in-house end-of-season review ahead of the final year on his contract, and the club have an eye on managerial contingencies should it be decided that Wenger has to go. His best chance of salvaging the season – and Champions League qualification – would appear to be the Europa League, in which Arsenal have been drawn to face Milan in the last 16.

They entertain City, the Premier League leaders, at Emirates Stadium on Thursday night – whom they trail by 27 points. They are 10 points behind the division’s fourth-placed team, Tottenham Hotspur.

“I am just amazed that I have to always answer things that are exactly the same,” Wenger said, when asked about his future. “I am here for 21 years. I turned the whole world down to respect my contracts. So I am still amazed that I still have to answer these types of questions.”

Wenger has previously indicated that he turned down job offers from Real Madrid and Paris St-Germain, among other clubs.

“My position is my position,” Wenger continued, brushing aside the issue of the end-of-season review. “Honestly, that’s the last worry I have at the moment. My worry is to focus, to get the team ready for tomorrow’s game. We are in that kind of situation where you want to focus on the next game. I don’t ask you if your position is reviewed at the end of the season.

“My job is to focus on performing and my job is to perform. It’s for other people to judge me. It isn’t for me to evaluate that. Does it stop you to sleep that my position is uncertain or would not be certain or is certain? No. What is interesting in football is the performances of football, the game you will see on Thursday night. That is what is important. All the rest may make headlines but it is not really interesting.”

For the umpteenth time, Wenger called for perspective after a morale-sapping defeat. He reminded his audience that Arsenal had not lost to a team at “the bottom of the league in division five”, rather one that was dominating English football. He pointed out that City had scored with all three of their shots on target while he also argued that the game had been tight until the second goal went in on 58 minutes.

Wenger stood his ground in the face of the criticism which, as ever, was savage. Gary Neville led the way on Sky Sports by labelling Arsenal as “spineless” and questioning why some of their players were walking and failing to track back.

“You could find that [WALKING]on both sides,” Wenger said. “You can always get out pictures from a game that justifies what you think. You find in every single game, on both sides, moments where a player doesn’t track. You have to analyse why. Has he made two runs before to go in behind and was exhausted, or did he not track because he didn’t want to? That is different.

“Of course, the players gave me everything. I am long enough in the game to know that when you lose a big game, people always say that the players don’t want it enough. Did we lose the game because of that? I am not convinced. When there is a big difference like 3-0 you always get that impression. For me, it is not the main reason.

“We got to the final and you don’t get there by coincidence. You have to fight to get there and we did. We didn’t play against a poor team in the semi-final, we played against Chelsea and we have shown that we can fight. We have to live with the criticism, it’s part of the modern game. People who comment – their job is to comment, so you have to live with that. What is important is how we respond.”

Wenger reported that Nacho Monreal would be out for one or two weeks with the disc problem in his back that he suffered on Sunday.