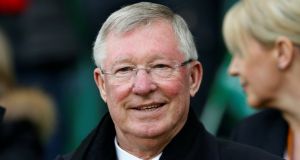 Former Manchester United boss Alex Ferguson, the most successful manager in the history of the British game, is seriously ill in intensive care after undergoing emergency surgery following a brain haemorrhage.

Well-wishes immediately flooded in after his former club, where he spent more than 26 years in charge, announced the news in a brief statement on Saturday evening.

The club said the procedure had gone “very well” but that the former manager would need a period of intensive care to aid his recovery.

Ferguson had appeared fit and well when he presented his old sparring partner Arsene Wenger with a memento at Old Trafford last Sunday ahead of the Frenchman’s departure from Arsenal.

But rumours began to circulate about the 76-year-old’s health after Doncaster manager Darren Ferguson, Alex’s son, did not attend his side’s final match of the League One season against Wigan because of what was reported as a “severe family issue”.

The Football Association, Premier League, Fifa, Uefa and individual clubs from Britain and around the world tweeted their best wishes along with a host of current and former United players.

David Beckham posted a picture on Instagram of him signing a contract as a teenager alongside Ferguson, accompanied by the message: “Keep fighting Boss.. Sending prayers and love to Cathy and the whole family x manchesterunited”.

Former United striker Wayne Rooney wrote on Twitter: “Get well soon Boss. Thoughts with all the family at this sad time. #AlexFerguson”

United club captain Michael Carrick said he was “absolutely devastated” by the news, adding in a post on Twitter: “All my thoughts and prayers are with him and his family. Be strong Boss.”

Absolutely devastated to hear about Sir Alex being unwell in hospital. All my thoughts and prayers are with him and his family. 🙏🏻🙏🏻🙏🏻🙏🏻 Be strong Boss xx

And Cristiano Ronaldo, who was signed by Ferguson as an 18-year-old in 2003, said on the social network: “My thoughts and prayers are with you, my dear friend. Be strong, Boss!”

Mike Phelan, who played under Ferguson for United and later served as his assistant manager, wrote: “#SirAlex You’ve won more than most and if anyone can you can boss.”

Everton manager Sam Allardyce, a long-time friend and adversary, said he knew something serious had happened when Darren Ferguson missed the game at Doncaster.

He added: “I am going to find out how he is as soon as I possibly can... I hope he is in good hands and I hope the operation is a major success because as a personal friend... I hope he has a full recovery.”

Ferguson retired in May 2013 after winning 38 trophies during 26-and-a-half years as manager.

He had a prolific career as a striker in Scotland but it was when he entered management that his true talent in football became clear.

After transforming St Mirren, Ferguson took over the hot-seat at Aberdeen and guided them to the European Cup Winners’ Cup in 1983, beating Real Madrid in the final.

Ron Atkinson’s sacking led to Ferguson taking over at Old Trafford in November 1986.

Success did not come immediately, and football folklore has it that Ferguson was nearly shown the door himself before an FA Cup triumph in 1990 paved the way for an unprecedented two decades of glory.

The highlight was United’s treble of Premier League, Champions League and FA Cup in 1999, and he went on to achieve more European glory in 2008 as well as 13 league titles.

“Everyone at Manchester City wishes Sir Alex Ferguson a full and speedy recovery after his surgery,” they said.

Aberdeen Football club added: “The thoughts and prayers of everyone connected with Aberdeen Football Club are with our former manager, Sir Alex Ferguson and his family following tonight’s news.”

In their statement, the club added: “His family request privacy in this matter. Everyone at Manchester United sends our very best wishes.”