From Wednesday to Saturday the last eight takes place in Lisbon 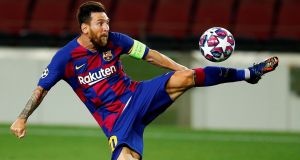 On the one side, the fairy story of this season’s Champions League, the sole remaining Italian club in the competition with their annual revenues of €188.6m. On the other, the habitual French champions with their annual revenues of €635.9m. Atalanta are delighted even to be in the Champions League, never mind to have got this far, while Paris Saint-Germain are weighed down by the burden of never having got beyond the semi-final, and never having got beyond the quarters under their Qatari ownership.

Stylistically they are very different as well. Under Gian Piero Gasperini, Atalanta play breathless attacking football, pressing hard and looking to create overloads across the pitch. Under Thomas Tuchel, although PSG have become more cohesive than they were previously, they are still a side that plays though its two huge celebrities, Neymar and Kylian Mbappé. Atalanta are very clearly more than the sum of their parts; for PSG, it seems a constant struggle to prove that they are not less, a gaggle of stars in search of a constellation.

PSG are perhaps the most absurd of all the absurdities of the superclub era. Until six years ago, there had never been a domestic treble in France. In the last six years there have been four, yet all PSG’s success feels empty because it’s been achieved against much weaker, less well-resourced opponents and has never translated into real success in Europe.

In the Champions League the pattern has been for them to collapse in the face of the first proper challenge, largely because they’re so unused to being tested. PSG clearly have a better squad than Atalanta, but much depends on how they handle Atalanta’s press. It’s enough to unsettle anybody, but PSG may be especially susceptible given no side in France would ever play so aggressively against them. A lack of matches after the abandonment of the French league – only two Cup finals in the past five months – may also count against PSG.

The prognosis might have been very different had Leipzig met Atlético back in March, when the quarter-finals were supposed to be played. Back then Atlético looked out of sorts, struggling with yet another season of attempted transition to a supposedly more progressive approach, while RB Leipzig still had Timo Werner. Five months later, Atlético are buoyed by finishing their domestic season in fine form, winning seven and drawing four of their final 11 games to claim third in the league and qualification for next season’s Champions League, something that was by no means assured when lockdown began.

And having eliminated Liverpool, the defending champions, in the last 16, and progressed further than Real Madrid, their bêtes noires in this tournament, for the first time since 1996-97, there’s no reason for them not to believe this could be their year – providing, that is, the two positive Covid tests don’t presage a wider problem. The one-legged format may play into their hands as well, given there is probably no coach better at game management than Diego Simeone.

Leipzig have been hugely impressive this season, both domestically – where they ended up being undone by too many draws – and in Europe. Their demolition of Tottenham in the last 16 suggested them as a realistic outsider to win the tournament itself. But that was with Werner. That he has been allowed to move to Chelsea before the end of the season is a disgrace, yet another example of modern football’s prioritisation of money. There is still enough firepower in this Leipzig side to trouble Atlético, particularly with Patrik Schick back in form, but Emil Forsberg, who presumably will take Werner’s place on the left of the front three, does not offer the same threat.

The only former champions who remain meet, but they could hardly do so in more contrasting situations. Bayern are favourites for the Champions League and with good reason. Their 4-1 dismissal of Chelsea on Saturday was their 26th win in their last 27 games. Under Hansi Flick they have rediscovered the swagger that had gone missing under Niko Kovac. They press better than anybody in Europe, they have tremendous pace in attacking areas and in Robert Lewandowski they have the best centre-forward in the world. Two goals and two assists in the second-leg win over Chelsea took his tally to 13 goals and four assist in the Champions League this season. With their rejuvenation well underway and other giants stuttering or stagnating, and Liverpool gone, the only negative for Bayern is being on, by far, the tougher side of the draw.

Barcelona are one of those stagnating giants. Even in beating Napoli 3-1 on Saturday, they seemed oddly tentative, insecure at the back and heavily reliant on Lionel Messi going forwards. Their midfield has been vulnerable to direct runners for years, in part because of how stretched they become as a side with the lack of pressing from the forward line. It was presumably partly to improve that that Antoine Griezmann was signed, but he hasn’t settled on the left and is yet to gel with Luis Suárez and Messi.

Barça and Bayern haven’t met since the semi-final in 2015 when Pep Guardiola’s Bayern took a surprisingly aggressive approach at the Camp Nou and ended up being beaten 3-0, eventually losing the tie 5-3 on aggregate. On form, though, this seems likely to be more similar to the previous meeting two years earlier, also in the semi-final, when Bayern demolished Barça 7-0 over the two legs.

Lyon finished seventh in Ligue 1, 28 points behind PSG, who had a game in hand. And that was after only two thirds of the season had been played. For them to get past Juventus on away goals was a minor miracle, and evidence of just how shambolic the Italian champions have been this season, but it’s extremely difficult to see how it could pull off another miracle against City – even if they did shock them at the Etihad in the group stage last season.

City have a glass jaw. They have deficiencies at the heart of their defence. They are vulnerable to the counter-attack and it may be that Memphis Depay can hurt them with his direct running – the former United forward is happily recovered from the cruciate injury that would have kept him out of a quarter-final in March – but the issue is rather at the other end. After five months without football, Lyon have played just two competitive games and in both of them they have essentially sat deep and looked to cling on – in losing on penalties to PSG in the Coupe de la Ligue final after a 0-0 draw and in losing 2-1 at Juve to win on away goals.

Their approach will presumably be similar against City, but City are a rather more cohesive and fluid attacking side than either even if they are perhaps not quite so ruthless as they might be. Lyon conceded under a goal a game in the league and haven’t let in more than two in Champions League defeats to Benfica, Zenit and Juve this season, but it’s still hard to believe they will be able to hold out. Rudi Garcia’s only previous two meetings with Guardiola, when Roma met Bayern in 2014-15 ended in 2-0 and 7-1 defeats.

1 Born to ride, born to win: Sam Bennett, the making of a green machine
2 Saracens’ emphatic opening salvo enough to keep Leinster at bay
3 Next stop the Champs-Elysées in green for Sam Bennett
4 Maro Itoje proves he has no peer in the northern hemisphere
5 Saracens deliver the brutal blueprint on how to beat Leinster
Real news has value SUBSCRIBE