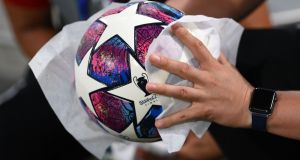 The draw for the second qualifying round of the Champions League was made on Monday morning. File photograph: Getty Images

Dundalk will host Norwegian champions Molde or KuPS of Finland in the second qualifying round of the Champions League if they triumph against Slovenian side Celje next week.

As Slovenia is not on the Irish green list, that game will take place in a neutral venue in Hungary next Wednesday.

Molde, who Ole Gunnar Solsjaker managed before taking over at Manchester United, will be confident of advancing from the first round qualifier.

Celtic have been drawn at home again if they can win their first qualifier later this month.

Neil Lennon’s side are on track to host Hungarian champions Ferencvaros or Swedish title winners Djurgardens. Celtic were drawn at home against KR Reykjavik on Sunday for their opening qualifier.

That game is due to take place on August 18/19th in Glasgow but there is still a possibility the fixture could be staged at a neutral venue, if the Icelandic side have any Covid-19-related obstacles getting to Scotland.

The second qualifying round is due to take place the following week.

Linfield also discovered who their opponents might be if they pull off a shock win over Legia Warsaw. The Belfast side are still engaged in the preliminary round having won their first fixture on Saturday, and face Kosovan champions Drita on Tuesday. If they win that, they take on the Poles for the right to host Ararat-Armenia or Cypriot team Omonia.

The first three qualifying rounds are being played as one-off ties before reverting to two-legged affairs for the play-off round. Poland, Hungary, Greece and Cyprus have been earmarked as the destinations for any other games which might need to be played in neutral venues.

League of Ireland leaders Shamrock Rovers will host Finnish team Ilves Tampere in their opening Europa League qualifier. That’ll be in Tallaght Stadium, unless travel restrictions force a change to a neutral venue.

Bohemians travel to Hungary for their qualifier against Fehérvár, formerly known as Videoton. Derry City face a trip to Lithuania to play Riteriai.

All first round matches will be one-off ties, taking place on August 27th, seven days after the preliminary round.