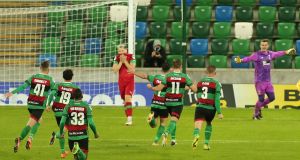 Football fans will be allowed inside a stadium in the UK for the first time since lockdown when Ballymena United meet Glentoran in the Irish Cup final at Windsor Park in Belfast on Friday.

Supporters have not attended matches since football was suspended in March, with games held behind closed doors as a condition of the restart in June. Hopes that the new Premier League season could start on September 12th with some fans in attendance were quashed on Monday when the sports minister, Nigel Huddleston, confirmed October 1st as the target date.

In Northern Ireland the easing of lockdown restrictions means 500 fans can attend Friday’s final. The Irish FA has been in talks with the Northern Ireland executive over having a crowd at its showpiece occasion since it was announced fans could attend outdoor sports events.

Windsor Park has an 18,500 capacity but only 250 fans from each club will be allowed in. Supporters of Ballymena and Glentoran, who reached the final with penalty shootout victories against Coleraine and Cliftonville respectively in semi-finals behind closed doors on Monday, will be assigned seats behind the goals.

The delicate issue of who receives tickets has been decided differently by the finalists. Glentoran will distribute their allocation free of charge to players’ families, club vice-presidents, life members, life season-ticket holders and volunteers who, according to the directors, “have worked tirelessly to help the club through the recent public health emergency”. The remaining tickets went into a raffle among season ticket holders. Ballymena will draw a ballot from among season ticket holders, match day staff and volunteers.

The IFA will employ extra stewards and supporters will have their temperature checked before entry. Testing players for Covid-19 is not mandatory under IFA regulations, unlike in the Premier League and EFL, but the organisation has paid for tests, as it did for the semi-finalists at Windsor Park. The winners of the 2019-20 Irish Cup will be decided almost a year after the competition started on 17 August 2019.

It has also been reported that the Community Shield on August 29th between Liverpool and either Chelsea or Arsenal could serve as a test event to welcome a restricted number of supporters into Wembley as part of plans for supporters to make a socially distanced return to sports venues in England from October 1st. – Guardian