Paul Cook resigns as Wigan manager ahead of appeal hearing 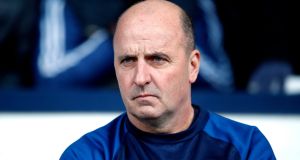 Paul Cook has resigned as manager of Wigan Athletic after they were handed a 12-point deduction and relegated from the Championship. The club’s appeal against the punishment will be heard on Friday but Cook departs in search of a fresh challenge after three years at the club, including a title-winning season in League One.

He led Wigan to 10 victories from their last 18 matches, a return that would have secured their Championship status but for the penalty applied on the final day of the season after their owner put the club into administration at the start of July.

The club will argue at the hearing, expected to last about a week, that the deduction should be waived owing to “force majeure” circumstances of the coronavirus pandemic shutdown. There is little expectation their appeal will be successful and Cook, who has been linked with vacancies at Birmingham and Bristol City, is understood to have grown tired of the circumstances.

The 53-year-old led Wigan to promotion to the Championship as well as an FA Cup quarter-final in his first season. Opta statistics show he has won 104 league games since the start of the 2015-16 season, when he was at Portsmouth, a number bettered only by Chris Wilder (119), Jürgen Klopp (118) and Pep Guardiola (113) in English football’s top four tiers.

Wigan would have been due compensation had he moved directly into another job, but it is understood Cook has told the administrators he does not have another position lined up.

Wigan’s administrators will listen to offers for players and accepted a £2.1m bid from Queens Park Rangers for the Wales striker Kieffer Moore, but he is understood to be subject of bids from other Championship clubs. The England Under-18 forward Joseph Gelhardt is of strong interest to Leeds and the highly-rated Alfie Devine and Jensen Weir have been sold to Tottenham and Brighton respectively to help cover staff wages and ongoing costs. – Guardian

1 Shock at golf clubs as sport faces shutdown in Level 5
2 Molde turn up the heat in the second half to dim the lights on Dundalk
3 Dan Leavy could make Leinster return against Zebre
4 GAA scrambling to deal with GPA demand for ‘baseline testing’ of all county panels
5 Level 5 golf shutdown: Ireland one of few countries to close courses
Real news has value SUBSCRIBE