FAI in line for more than €5.5m in emergency Fifa funding

On top of grants, the association will be able to apply for an interest free loan 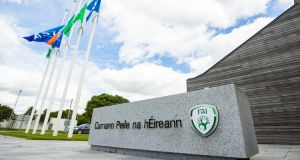 The FAI are in line to receive €5.5m in funding from Fifa. Photo: Tommy Dickson/Inpho

Fifa have announced the latest phase in provision of emergency funding to national governing bodies around the world with more than €1 billion to be made available to its 211 member associations. The FAI set to benefit from more than €5.5 million in grants and loans.

The federation has been working on the detail of its Covid-19 Relief Plan for several months but the key figures were approved by its Council last month when it was agreed that a grant of $1 million (€850,000) would be provided to every association with an additional $500,000 (€425,000) specifically for women’s football.

On top of that, interest free loans of up to 35 per cent of an association’s annual turnover, up to a maximum of $5 million (€4.25 million) will be made available. The FAI should be able to avail of the full amount.

The organisation required that a significant proportion of previous supports be used to help particular constituencies and the suggestion on this occasion is that funds might be used for purposes such as “the restart of competitions, the implementation of return-to-play protocols, the participation of national teams in competitions, the hiring and re-hiring of staff, the maintenance of football infrastructure, and general administration and operating costs.”

Fifa President Gianni Infantino described the plan, which has a total value of around €1.275 billion, as “a great example of football’s solidarity and commitment in such unprecedented times.”

Strict conditions will, Fifa says, be attached to the way the money is used and the federation says that it will be establishing a committee to administer the programme and ensure the rules are adhered to. The announcement will still be hugely welcome in Abbotstown, though, where the coronavirus pandemic has compounded the association’s well publicised financial troubles.

This prospect of the Fifa funds comes a matter of months after the FAI reached an agreement with the Government, Uefa and Bank of Ireland that was widely believed to have saved the association from financial collapse.

In January, the Government committed an additional €19.2 million in support, a mix of new grant aid and interest free loans that came as the FAI’s leadership signed it up the Memorandum of Understanding (MOU).

More recently the Government announced a substantial package of support for all of the sports organisations affected by the coronavirus related shutdown and the association was expected to get €10 million.

The payment of that money appears to have been linked to the implementation of the MOU’s terms, however, including the appointment of additional independent directors, something that is being resisted by many senior figures within the game on the basis that it will give effective control of the board to outside appointees.

The association has also reached a substantial and wide-ranging deal with the Bank of Ireland. Under its terms, the existing debt on the Aviva stadium has been refinanced with repayments extended by nine years to 2033.

The bank has also made €14 million in borrowings available with the option over the coming year or so for the organisation to add an additional €10 million to that sum.

It is not clear how much Uefa contributed to the pot in January although initial talk of the entire package being worth around €35 million would not have left a particularly large gap to be made up.

In April, the European federation did make €236.5 million of HatTrick (the major programme of support by the organisation for national associations) funding available early but the FAI did not benefit as the €4.3 million that it would ordinarily have been due had already been drawn down during a previous round of financial firefighting in Abbotstown.

England lay down marker for Ireland after bonus point win in Rome 19:09
Dublin return from the dead to give Kilkenny a scare in Croke Park thriller 18:57
James McClean nets for Stoke as they beat Rotherham 18:35
Impressive Waterford power past Cork to reach Munster final 18:20
Dan Martin steals another Vuelta advantage atop La Farrapona 18:04

1 Jack Nicklaus’ Trump endorsement leads to avalanche of dismay
2 Six Nations - France v Ireland: Kick-off time, TV details, permutations, team news and more
3 Ireland, France or England? Who needs what to win the 2020 Six Nations
4 England lay down marker for Ireland after bonus point win in Rome
5 World Handicap System: What is it? How does it work? Will my handicap change?
Real news has value SUBSCRIBE
Crossword Get access to over 6,000 interactive crosswords