Leading neuropathologist wants restrictions on heading at all levels 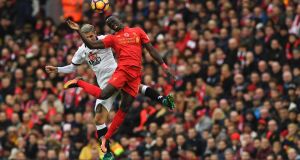 Heading in soccer should be reduced in the professional game, not just in the under-12s, according to the leader of an influential study which found an increased risk of brain disease among footballers.

The Scottish Football Association (SFA) is moving towards a ban on heading in training for under-12s, something which no other European country currently has in place. However, the timescale remains unclear.

The move follows the publication last October of the initial findings from Field Study, which was carried out by researchers at the University of Glasgow. It discovered that footballers were 3½ times more likely to die of neurodegenerative disease than age-matched members of the general population.

Prof Willie Stewart is the consultant neuropathologist leading that research, and argues that while no definitive link between head injury or impact and dementia among footballers has been established, there is enough evidence to require action to be taken now.

He insists heading has to be curtailed at all levels of the game, not just in the youngest players.

He told the PA news agency: “A move to reduce head impacts in youth sports is a good idea, but I would caution that that’s probably not enough.

“It’s not enough just to say ‘let’s take heading out of the game in under-12s’. I think we need to look across the entire game – amateurs, seniors, professionals – and say ‘where else can we make changes to be effective?’

“And not just in football, look across all sports and think ‘what could we do differently?’ It’s a good start, but I hope that this isn’t the end, that by changing under-12s we’re somehow solving the problem.

“We haven’t got the cast-iron evidence of direct causality, but what we have is more than enough evidence, adding up over the decades and right up to the Field Study at the end of last year, which says there’s a strong association between contact sports and development of dementia.

“And when we look at what is the common factor, exposure to head injury and head impact is the one thing that stands through.

“Now there may be other things we haven’t yet recognised, but Lord knows we’ve been working hard to identify them and we haven’t yet identified them.”

Dawn Astle has campaigned for greater research into the issue ever since the death of her father Jeff Astle, a former West Brom and England forward, in 2002.

He died aged 59 from chronic traumatic encephalopathy (CTE). The coroner ruled that his death had been caused by the repeated trauma of heading a ball, describing it as an “industrial disease”.

She welcomed the news of a possible ban as “a positive step”, and added: “My dad’s dementia started at some point didn’t it? It’s always been my belief that it manifested in my dad, although no one was aware of it, when heading footballs as a kid. Children’s brains are more vulnerable because they’re still growing.

“Going back to Scotland, I wished our [English] FA would do it. I hope now one [association] has they will all follow suit. It’s not like a metatarsal injury – this is something that kills you.”

It is understood there is unanimity between the SFA board, the professional and non-professional game boards and medical representatives to recommend such a ban. It could be in place for the grassroots season, which runs from March to November.

The English FA’s head of medicine, Dr Charlotte Cowie, said last month that a research task force was now conducting a review of possible changes to heading coaching and training at all levels. It is understood this does not mean banning heading, but an emphasis on quality over quantity.

The Irish FA is aware of the Field Study, while in Wales “mini football” is the only recognised form of football for children under 11 years old.

A Football Association of Wales spokesperson said: “While the game has all the features of real football, the smaller scale of the game means that the focus is on ball-to-feet practices and technique.

“We are currently reviewing mini football in Wales, and in all the reviewed matches over the last season there were no incidents of heading the ball in play. The findings of this review will be published later this year, and any guidance on heading will form part of the recommendations.”

Rangers manager Steven Gerrard believes more needs to be done to examine the link between football and dementia, but hopes heading in children’s football is not completely phased out.

“I used to love heading balls, probably from the age of four. So I wouldn’t take it away from them completely because they will be watching their heroes every day on the TV heading and scoring goals.

“But you can certainly do things; you can help them by making the balls smaller or lighter, or doing heading in a different way, without using the heavy-case balls.”