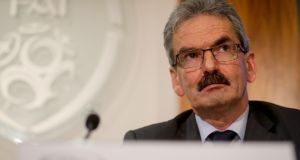 Sligo Rovers chairman Martin Heraghty, a former civil servant at the Department of Agriculture, is already a member of the FAI board. Photograph: Oisín Keniry/Inpho

The election to succeed Donal Conway as president of the FAI will be a two-horse race between Sligo Rovers chairman Martin Heraghty and long-time Defence Forces representative on the FAI Council, Gerry McAnaney.

Voting will take place at an egm of the association in Blanchardstown when the departure of Conway will complete the overhaul at board level long demanded by Minister for Sport Shane Ross as a condition of increased Government support for the financially stricken organisation.

Heraghty, a former civil servant at the Department of Agriculture, is already a member of the board and if he is elected to the presidency, will be replaced by another nominee from the League of Ireland. It remains to be seen whether that is viewed as a negative by representatives of other leagues and affiliates as there are already two other directors with backgrounds in the senior game.

McAnaney ran against one of those, Paul Cooke, for the position of vice-president in the summer, when he lost by 80 votes to 57. Cooke, though, was already centrally involved in helping to address the association’s dire financial position and so was probably well placed to win.

The former army officer, who played for Ireland at schoolboy level and League of Ireland with Cork City and Cobh Ramblers for a brief time in the 80s, spoke well on the day and may well feel he has a better shout now. He has been on Council for almost 20 years but only recently became a representative for the Football for All sector.

He is regarded as having been a critic of former chief executive John Delaney but was involved in various disciplinary and development committees over the years, and worked at one stage on one of the association’s technical plans with Brian Kerr and Packie Bonner. He is a retired army commandant.

Heraghty, who ultimately reached assistant secretary general level, spent 40 years in the civil service, much of it apparently promoting the Irish food industry. He also worked in a number of other roles, however, including private secretary to various ministers and five years as first secretary at the Irish Embassy in Germany.

He joined the board of Sligo Rovers in 2014 and took over as chairman in February 2016. He had served on a number of club committees before being elected to the association’s board in the summer.

The election will provide an interesting insight into the current balance of power within the association.

Limerick’s High Court case against the FAI, meanwhile, was put back to Friday as the two sides sought to strike some last-minute deal that might save both sides quite a bit of money that neither of them is in great shape to be spending right now.

Limerick’s owner, Pat O’Sullivan, is aggrieved that the club, which recently underwent a failed examinership process, was not invited to apply for a league licence and a separate entity, Limerick United, has just been granted permission to enter teams in the association’s various underage leagues.

There was a sense on Thursday that a deal might be struck that allowed the club to belatedly submit an application to participate in the first division this season, although it is hard to imagine that the move would result in any sudden reprieve given the problems encountered last year and the fact that Shamrock Rovers have already had a second team admitted into the league.

If it somehow did, however, the association’s problems might actually get worse as the division’s clubs are already up in arms over the Rovers decision and would be unlikely to take the prospect of an 11-team division well.

Should fans be allowed drink in the stand at sporting events?
Here is your handy guide to sport on television this week