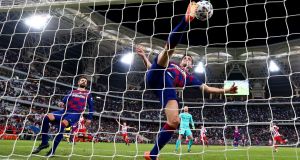 Barcelona topped a list of the world’s most money-spinning football clubs for the first time in an annual league table that also outlined the shifting balance of power among Premier League clubs in London and the north-west of England.

The Catalan club overtook Real Madrid to become only the third to lead the 23rd Deloitte Football Money League as the world’s 20 biggest clubs generate record combined income of €9.3bn (£8bn) for the 2018-19 season.

Tottenham overtook Arsenal and Chelsea to become the biggest revenue-generating club in a London mini-league thanks in part to the broadcast revenue from a Champions League run that took them to the final.

The north London club achieved its highest ever position of eighth with revenues of €521m, just ahead of Chelsea on €513m, with Arsenal occupying 11th spot on €445.6m, down from ninth.

Deloitte said it expects Tottenham’s matchday revenue to soar past €117m for the first time next year after a full term in the new 62,062 stadium, which the club occupied for less than half of the season covered in the report.

Manchester United finished in third with revenues of €711.5m but Deloitte said the traditional financial powerhouse of English football was at risk of losing its crown for the first time, to Abu Dhabi-owned Manchester City or even Liverpool.

City reported revenues of €610.5m, with Liverpool not far behind as England’s third most lucrative club on €604.7m.

Both north-west rivals could make up a shortfall of more than €100m because United have forecast a fall in revenues of up to £85m next year as a result of the club’s repeated failure to qualify for the Champions League.

Sam Boor, senior manager in the Sports Business Group at Deloitte, said shifting sands in English football proved that football clubs could not afford to miss out on European competition.

“The impact of participation and performance in Uefa club competitions on revenue is evident in London and the north-west, with the rise of Liverpool, Manchester City and Spurs driven by reaching the Champions League knockout stages.

“The relative decline of Arsenal is a direct result of not participating in the competition for a second consecutive season, a fate that may also befall Manchester United.”

The importance of European football was underscored by the fact that TV broadcast revenues make up 44 per cent of clubs’ income on average. Transfer fees are not included in the calculations.

The report also showed the potential benefits of sound financial strategy, with Barcelona overtaking Real Madrid thanks to a new operating model.

Barcelona became the first ever football club to report revenues of €800m, which Deloitte said was thanks to a decision to bring merchandising and licensing activities in-house, taking better control of its globally-recognised brand.

The table also showed that football’s ability to generate cash shows no sign of slowing down, with the top 20 clubs forecast to break the €10bn revenue barrier some time in the next few years.