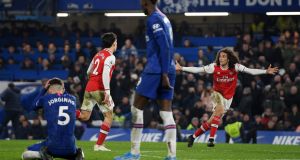 Two inconsistent sides, two baffled managers. For Frank Lampard, this result was tough to take. Chelsea played against 10 men for more than an hour, took the lead twice and ended up dropping more points at home. They lacked creativity again and paid for their carelessness when the electrifying Gabriel Martinelli dented their push for Champions League qualification with a stunning equaliser.

While Lampard seethed, Mikel Arteta celebrated Martinelli’s fearlessness and considered the defensive frailties that left Arsenal with a mountain to climb. For all the talk of progress, Arteta will know he must be ruthless with players like Shkodran Mustafi, whose catastrophic error led to David Luiz’s red card against his old side. Yet there was resolve from Arsenal when it mattered. They fell behind again when César Azpilicueta restored Chelsea’s lead. It did not last. Chelsea are too soft and Kepa Arrizabalaga’s form in goal is of grave concern. The Spaniard was the villain when he somehow let Héctor Bellerín’s shot squirm past him.

It always felt inevitable that David Luiz would hog the limelight on his return to his old ground. There was no respectful celebration from the Brazilian when he scored here for Paris Saint-Germain in a Champions League tie in 2015 and he looked to make his presence felt from the start, attracting the ire of the Chelsea fans when he charged into the back of Tammy Abraham and kneed the striker up the backside. Battle lines had been drawn and, as a wincing Abraham slowly pulled himself back to his feet, there was a sense that this was going to be a duel to watch.

Abraham would have the last laugh, although David Luiz could argue with some justification that his dismissal midway through the first half owed much to the brainlessness of Mustafi. While there have been signs of progress under Arteta, the fact remains that the Spaniard has inherited a squad containing a multitude of weaknesses. There is only so much Arteta can improve with his work on the training ground and that was underlined when Mustafi, a centre-back who always has a costly mistake in him, made the error that led to Jorginho putting Chelsea ahead from the spot.

After a promising opening Chelsea simply had to wait for Arsenal’s most unreliable player to self-destruct. Abraham had fooled Mustafi with a clever turn before scoring his side’s late winner at the Emirates last month and this time he was in the right place when the German sold Bernd Leno horribly short with a staggeringly incompetent back-pass. Abraham raced away, rounded Leno and, with the goal gaping, went down after being caught by a desperate lunge from David Luiz.

Stuart Attwell pointed to the spot and how the Chelsea fans chortled when they saw the referee reaching for his red card. David Luiz had denied Abraham a clear goalscoring opportunity and his plea for leniency fell on deaf ears, leaving him to head down the tunnel with mocking chants ringing in his ears. All that was left was for Jorginho to tuck his penalty away, giving Chelsea a lead their enterprising football deserved.

With Jorginho, Mateo Kovacic and N’Golo Kanté too sharp for Arsenal’s midfielders, the early chances all fell Chelsea’s way. The hosts were quick to spread the play out to the right, where Callum Hudson-Odoi was eager to run at the inexperienced Bukayo Saka, and there were worrying signs whenever Arteta’s side were defending dead balls.

Lampard, tense on the touchline, craved a killer instinct. The opening goal beckoned when Antonio Rüdiger rose highest at the far post and sent a powerful header into the middle, only for Abraham to nod straight at Leno. Andreas Christensen also headed wide when well placed and Hudson-Odoi almost got lucky with a cross that clipped the top of the bar.

Arsenal, their threat dimmed by the absence of the suspended Pierre-Emerick Aubameyang, were offering little as an attacking force. While the twinkletoed Nicolas Pépé drew Emerson Palmieri into a yellow card, Alexandre Lacazette was feeding off scraps. Chelsea were in charge and they almost pulled clear when Hudson-Odoi tested Leno with a rasping drive.

With Granit Xhaka moved back to partner Mustafi as an emergency centre-back, Chelsea’s task was to summon the ruthlessness which has eluded them on too many occasions this season. Complacency was their enemy and they flirted with disaster early in the second half, Arrizabalaga almost playing Jorginho into trouble with a slack pass. Chelsea’s fans howled at their goalkeeper, who looked unconvincing with the ball at his feet all night, and Arsenal began to show signs of intent, threatening through the surging runs of Martinelli on the left.

Chelsea huffed and puffed but they regained their poise in the dying stages. Hudson-Odoi crossed from the left and Azpilicueta turned past Leno from close range. Yet Bellerín would have the final say. – Guardian