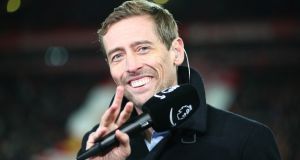 Peter Crouch didn’t reap too many benefits from the beans on toast and no gym diet. Photo: Clive Brunskill/Getty Images

There was much chat last week about the lengths to which Cristiano Ronaldo goes to keep himself in shape, despite being a rusty old 34, the not very surprising gist of it being that he exercises and sleeps a lot and eats mountains of healthy food.

He sleeps for eight hours a night and has up to five naps a day, has breakfast, two lunches, snacks and two dinners. (Where he finds the time to play for Juventus we’ll never know). Among his favourite food is swordfish, salad, chicken, salad, tuna, salad, cod and salad.

Peter Crouch possibly suspected that Gareth Bale was on a similarly exciting diet plan when they were together at Spurs, so impressed was he by the Welshman’s fitness and pace.

“So I started watching him really closely,” Crouch told FourFourTwo. “He didn’t go to the gym and just ate beans on toast, so I started doing the same. I thought, ‘Well I can do the no gym stuff, no problem – and beans on toast, I like beans’. I went for it, but some beans have more magic than other beans, I suppose.”

Pep Guardiola, dreaming of a team of Lionel Messis, on being asked if Sergio Aguero was the best out-and-out striker he’s ever worked with.

Oddest Question Put To A Player In A Match Programme

We’ll go with the one picked up by the Daily Mail that featured in the ‘Tombola’ section of Newcastle’s match-day programme, where fans get to ask their favourite player whatever question they like.

So, naturally, one fan asked Florian Lejeune how would he dispose of a body in one hour.

And Florian happily replied. “I’m watching a series at the minute called ‘You’ and it is about that! I would put it in the boot of my car, drive out to sea, put it on a boat and throw it into the sea with weights on it.”

It’d be a brave ref who’d give Florian a red card this season.

Most Peculiar Hashtag of the Week

#NotForEveryone. That was the one used by Inter Milan when they announced the signing of Ashley Young, one that sounded almost a little apologetic, as if they were conceding he’s not everyone’s cup of tea and his arrival at the club would not exactly leave their supporters all a-tingle.

It did, then, leave most folk mystified. A person called Carlo tried to explain the hashtag on the tweet machine – “It refers to the fact that they’re an elite club and certain calibre of player need not apply” – but that didn’t really help. As a Todd Lewin replied, “they’ve just signed 34-year-old Ashley Young, though.”

But, happily, it emerged that #NotForEveryone wasn’t created specifically for Young, it was in fact the name of a campaign Inter launched last summer. What was it about? Well, according to the club, it marked the start of a new journey in its history, its aim to “bring Inter alongside the world’s leading brands”. The “themes”, they said, of this new era are “determination, innovation, tirelessness and courage all contributing to our “#NotForEveryone” campaign. This Soul, This Name, This City. Not For Everyone.”

Nope, none the wiser either.

20: A reminder of how many million Euros Borussia Dortmund paid last month for Erling Haaland, scorer of a 23-minute hat-trick on his debut on Saturday. His right ear lobe is already worth more than that now.

“He is 19 years old. Do me a favour and give him a chance to develop.”

Borussia Dortmund president Reinhard Rauball asking the German media to ease up on the hype about Erling Haaland ahead of his debut on Saturday against Augsburg. After that hat-trick …. best of luck Reinhard.

“I like Brandon Williams..... he has that look in his eye of someone that would eat his opponent’s nose to win the match.”

“You had 60, 70, 80-year-old men and women punching their chests, screaming, ‘I! LOVE! YOU!’ Life is all about having that kind of relationship.”

Jürgen Klopp on feeling the Scouser love during Liverpool’s Champions League-winning parade back in June.

“I’m a great lover of Jürgen Klopp. I think he could go to Rotherham and take them to the Premier League. He’s that good.”

“Yesterday, I was walking around my home town with cows around me and now I’m here at Barcelona managing the best players in the world.”

Quique Setien on having his peace shattered by being appointed head honcho at the Nou Camp.

With a salary reckoned to be around the £20 million mark, you’d have thought Pep Guardiola might splash out on a chauffeur. Because according to the authors of ‘Pep’s City: The Making Of A Superteam’, it sounds like he’s very much in need of one.

“He has a reputation from his Barcelona days of being a hapless driver …. his wing mirrors don’t survive for long and he’s also managed to fill a diesel Range Rover with petrol and mangle a silver Bentley.”

“A source also told The Sun: “Pep is brilliant at many things but driving doesn’t appear to be one of them.”” No kiddin’.

1 Gerry Thornley: Wild reactions to this Ireland team as fickle as the wind
2 Man United’s net debt rises by €85.7m to €455.5m in three months
3 Joey Carbery undergoes surgery on ankle injury
4 Doris and Kelleher make strong case to start against Italy
5 England and Eddie Jones at the vanguard of rugby’s hybrid era
Real news has value SUBSCRIBE
Crossword Get access to over 6,000 interactive crosswords