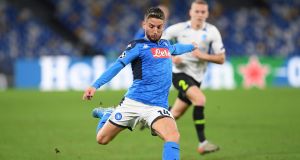 Chelsea have made an inquiry about the availability of the Napoli forward Dries Mertens as Frank Lampard seeks to solve his side’s goalscoring problems.

Lampard is keen to sign a player to compete with Tammy Abraham before the transfer window shuts on Friday and Belgian international Mertens has emerged as an alternative to Paris Saint-Germain’s Edinson Cavani, who favours a move to Atletico Madrid. The 32-year-old Mertens, out of contract at the end of the season, can play on the right or through the middle and has scored 116 goals for Napoli since joining from Genk in 2013.

Chelsea are sweating on Abraham’s fitness before Saturday’s trip to Leicester – he missed last weekend’s FA Cup win over Hull with an ankle injury – and are in talks with Inter Milan over the sale of Olivier Giroud, who has also been the subject of an inquiry by Tottenham. Lampard has regularly complained about his side’s lack of ruthlessness and Abraham’s deputy, Michy Batshuayi, has struggled.

It remains to be seen whether Napoli, who face Barcelona in the last 16 of the Champions League, are willing to let Mertens leave. It is thought that the Belgian, who has scored 10 goals for club and country this season, will not demand a move if Chelsea’s advances are rejected.

Chelsea have found it hard to land their main targets this month. They have been told that Borussia Dortmund’s Jadon Sancho and Red Bull Leipzig’s Timo Werner are not available until the summer, Lyon have repeatedly ruled out selling Moussa Dembele and Chelsea’s interest in Wilfried Zaha has cooled, with Crystal Palace valuing the winger at £80 million (€95 million).

Lampard has not hidden his admiration for Cavani and Chelsea have looked at signing the Uruguayan on a six-month loan. However the 32-year-old, who is out of contract at the end of the season, has agreed terms with Atletico and is waiting for Diego Simeone’s side to agree a fee. – Guardian