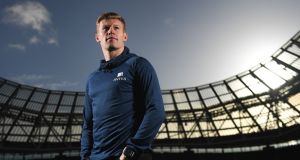 James McClean says that there has been a dramatic drop in the levels of abuse he has been subjected to during recent games. The 30-year-old Derryman, who plays for Stoke City and the Ireland international team, credits the tougher line taken by the English football authorities towards racism and sectarian abuse for the improvement.

“Yeah, it’s been huge,” he said on Tuesday at an event in the Aviva stadium to mark the opening of a specially created new area, provided by the insurance company itself, intended for visitors – mostly children – with sensory issues related to conditions such as ADHD, dyspraxia or autism.

“Look, I’ve been critical of them in the past and rightly so,” says McClean, “but credit where it’s due – they have been brilliant recently. I think the major turning point was charging Barnsley,” he continues in relation to the disciplinary action taken against the Championship club after he was abused there during Stoke’s visit on November 9th.

“I’ve had statements [of support] in the past which were token gestures and nothing was done about it, but for them to actually charge Barnsley and have investigations regarding Sheffield Wednesday and Huddersfield and whoever else, I think that’s massive.

“So, yeah, credit where it’s due; they’ve been brilliant recently and the abuse in the last few games has simmered right down, which was something that I thought was probably never going to happen.”

McClean believes improved protocols for reporting abuse as well as for match officials and host clubs to act on those reports have all contributed to the improvement, but he feels that the biggest factor is a realisation on the part of those who previously would been abusing him that they will now be opening up the club they follow to being sanctioned.

“Before each game now, the EFL and the FA have made the referees aware if they hear anything then they report it straight away. So I then do not have to,” he says. “It became a bit of a pain in the hole me having to go to referees all the time, it becomes repetitive.

“But there are also announcements over the Tannoy now, so the last few games have been fairly quiet. I would not say that it’s an attitude-change towards me. To be honest, I don’t think that they could care less about my feelings but I’m not complaining. It’s a first step.”

There has also been direct contact with the Irishman over the past week, he acknowledges. “I was asked the other day in a room with all the powers that be – the EFL, Kick It Out, PFA, FA, even the Staffordshire police were there – ‘what would I like to achieve from this?’ And I’m not trying to sound like some sort of big hero but if I have to be the fall guy for young Irish footballers coming through and don’t have to suffer this, then I’m happy to do that.”

Perhaps the change in atmosphere has impacted positively on the 30-year-old’s form, but the player himself puts the improvement down to Michael O’Neill and the confidence that he has instilled, not just in him but in a Stoke City side whose points-per-game return has trebled in the three months he has been in charge.

“I have a great relationship with him, which I also had with Martin, and that helps,” he says. “He told me to go and enjoy my football again and put me back in a position that’s natural to me. I’ve played left wing all my life, which has probably helped.

My youngest daughter is autistic. It’s a new experience for me. It’s difficult but she’s amazing

“I enjoyed the left-back stint, it was a challenge and an experience but, again, I think that comes down to the simple things. Just talking to me every day, telling me what he wants from me. He’s been breeding confidence in me and that’s huge.”

He says all of this at an event that is clearly of genuine personal importance to him.

“My youngest daughter [Willow, who is playing in an adjacent room with her Mum, Erin] is autistic,” he says. “It’s a new experience for me; it’s something I am learning each day, something new. It’s difficult but she’s amazing. Every day is a challenge, but every day is a good challenge.

“As she gets older, things are becoming more difficult for her, even simple things like going to a shopping centre or going on an aeroplane, which people do every day, so to be asked to come and be an ambassador and help launch it [the stadium’s new Sensory Hub], makes me proud because it’s amazing what they are doing here today.

“It helps people like Willow who have these same difficulties every day. Something like this makes it easier for their families to bring them to games. I haven’t experienced it yet because I’m out there playing but I’d ask my wife after the game ‘How was she today?’ and she’d say that the noise is difficult for her.

“Things like that there, which looks amazing by the way, if that can soothe them and make the experience of going to games less difficult, it’s amazing.”

Asked about his other kids, he says their names are Allie Mae and Junior, before revealing with a grin: “I wanted to call him James but the wife didn’t let me. She said she doesn’t want another James McClean.”

Man City’s Abu Dhabi owners not the sort to back down over ban 10:51
Pints and sports events; England ready to show their best 07:30
Frank Lampard says Harry Maguire should have been sent off 06:36
Willie Mullins prefers to ‘keep it simple’ and run Benie in Mares Hurdle 06:00
Stopping Jonny May’s pace must be high in Ireland’s priorities 07:14