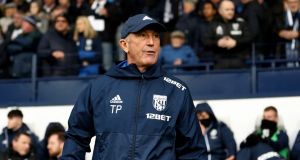 Before he had to watch his team shredded 4-0 by Alvaro Morata and Eden Hazard, Tony Pulis used what might be his last set of programme notes at West Bromwich Albion to defend his record there over the last three years.

“I am very much my own man, and find it difficult at times to look back at what we have achieved instead of what can be achieved in the future,” he wrote, implying that he had not enjoyed having to justify himself, and that he had only done so because certain things needed to be said.

Yet even the notes he had written in his own defence hinted at some of the reasons why the crowd at The Hawthorns were shouting “Tony Pulis, get out of our club”.

“When I joined the club back in January 2015 the club was in the bottom three, and really struggling,” Pulis wrote. “We managed to stay up, and, in fact, finished 13th. There were no great escapes because we achieved our goal with many games to go.”

The key phrase there is “achieved our goal”, that is, avoided relegation from the Premier League. Pulis is rightly proud of the fact that he has never been relegated as a player or a manager: it is the foundation of his personal brand.

“He has never been relegated” is the key point advanced by pundits like Alan Shearer and Steven Gerrard when they argue that West Brom should not fire him.

Yet maybe it wasn’t the best-chosen phrase given that one of the main criticisms of Pulis revolves around the way his teams have tended to switch off after reaching the 40-point mark, generally reckoned to be a points tally with which you are safe from relegation. This effect was particularly evident last season, when West Brom reached 40 points after 26 games, the fastest any Pulis team had done so. West Brom were eighth and well-positioned to challenge for a European place.

Then they lost nine and won just one of their last 12 games to finish with 45 points: a good season had turned into a mediocre one. This season they picked up where they left off, taking just 10 points from their first 12 games. The man who’s never been relegated has now won three of his last 24 league matches. If his team keeps playing like this he’ll be able to keep the no-relegations record or his job, but not both.

It may seem harsh to criticise Pulis for not doing more than simply keeping all of his teams up over the decade he has coached at Premier League level. But there is a problem with gearing everything towards the goal of winning 40 points, and it goes beyond the fact that your team eases off once the goal has been achieved.

The goal the best coaches set for their team is, above all, to play well; the points they pick up by playing well are a happy byproduct. This will often involve trying to get your players excited about some kind of footballing “philosophy” but the basic principle is that if you play to the best of your ability the points will take care of themselves.

Pulis styles himself as a pragmatist who is more interested in points than in philosophies, but when you make it all about hitting a particular points target you start to think of points as more important than they are.

Once you’re counting points you become acquainted with the phenomenon of loss-aversion, when you find the pain of losing precious points is greater than the joy of gaining them.

Loss-aversion is followed by risk-aversion: you start to play more and more conservatively because you don’t want to lose. And gradually whatever joy you once took in your game leaches away. This is the story of all Tony Pulis teams.

In the programme notes Pulis insisted that the players had not given up on him. “Nobody can accuse the lads of not giving everything [stats released last week show that WBA has the second highest work output in the Premier League].”

It is true that West Brom under Pulis have generally been among the highest-ranked teams for total distance covered – though not for high-intensity sprints. The striking thing here is that Pulis describes playing football as “output” – as though the West Brom players were workers on some assembly line, cranking out “metres covered” in the hope that this will somehow translate into results. No wonder their football seems so joyless and mechanistic: the feet are still moving but the light is gone from the eyes.

Pulis might argue that a man in his position has to be hard-headed: the club is a business which can only prosper by staying in the Premier League: no other goal is worth thinking about.

But there’s more than one way to prosper. Over the five seasons Pulis managed Stoke in the top division the club’s net spend averaged nearly £20 million per season – by this measure they were among the biggest-spending teams in the league. And yet they never spent extravagantly on players: Pulis’s most expensive signing in those years was Peter Crouch for £10 million.

The problem was on the other side of the ledger: nobody ever bought any of Stoke’s players for big money. Their biggest sale in that time was Seyi Olofinjana, who went to Hull for £3 million. There was something about the way Stoke played that prevented their players from looking like the sort of players other clubs might want to buy.

Contrast this to Southampton, who in 2013 hired a forward-thinking coach in Mauricio Pochettino, and saw the valuations of their squad skyrocket to the point where in the summer of 2014 alone they sold £92 million worth of players.

Pochettino and many of his former Southampton players have gone on to lucrative careers at bigger clubs. None of it would have happened if they had been happy to settle for 40 points.