‘I thought they’d show me more. They need to show me why they’ve got that reputation’ 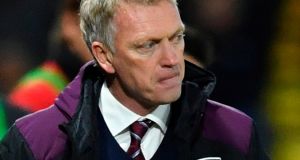 David Moyes claimed some “big players with big reputations” are letting West Ham down after the 2-0 loss at Watford.

Goals from Will Hughes and Richarlison condemned the Hammers to defeat in Moyes’ first game in charge to illustrate the magnitude of the task in hand.

Andy Carroll was jeered by the away supporters, who were clearly not amused by his comments following the recent thrashing by Liverpool where he criticised them for leaving early.

And Moyes said: “I always thought this was a big job. Some big players with big reputations disappointed me a lot.

“I thought they would show me more. They need to show me why they have got that reputation.

“I don’t enjoy the performance and I expected us to do better. We tried to stay in the game and give ourselves a chance — and we probably did — but overall it was not good enough.”

Hughes steered in his first goal for Watford in the 11th minute, capitalising after Andre Gray’s miscued shot fell kindly for him.

Heurelho Gomes made a stunning double save to deny Arnautovic, and then Kouyate blazed their best opportunity over the crossbar.

And the atmosphere in the away end turned toxic after Richarlison’s shot crept under Joe Hart, with the fans anger by now directed towards the club’s board.

“I don’t know the history and the reasons for that,” added Moyes.

“I thought they were supportive of me and I’m thankful for that. But we need them now, we need a united club.

“Those supporters know more than me about the history, I told the players it’s tough to play in front of a crowd like that but a goal would make the fans feel better.”

West Ham’s latest setback took away some of the spotlight from Hornets boss Marco Silva, who is still being heavily linked with the vacancy at Everton.

The Portuguese coach once again gave no assurances about his future when quizzed whether this would be his last game in charge.

“What I can control and what is in my hands is the next training session and we will be back in tomorrow,” he said.

“I know the speculation and people ask questions of our commitment, but me and my players gave a very good answer about our commitment.

“This type of interest in players and coaches happens but it’s not fair to question our commitment.

“I’m not going to talk about that situation any more. Tomorrow I will do the next session to prepare for the next match.”