Ken Early: Seeing Hoolahan take the field may be a bad sign 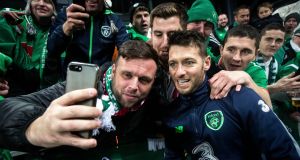 Wes Hoolahan takes a selfie with a fan after the first leg in Copenhagen. Photograph: Ryan Byrne/ Inpho

Walking around in Copenhagen on Saturday afternoon you could see that the World Cup play-off was a big deal. Thousands of red shirts and daytime drinking in the city squares told you this match was something a little out of the ordinary.

For any such game there are lots of casual fans who join in for the party atmosphere, and you always feel a bit sorry for them when so little ends up happening in the match. They must wonder what football fans get out of it. “Is this really what you spend your time doing?”

Ireland’s midfield three of Harry Arter – who was outstanding – Robbie Brady, and Jeff Hendrick deserve credit here. Yes, even Hendrick: he didn’t do much on the ball, but he put himself in the way of a lot of things that didn’t happen because he was in the way. Christian Eriksen’s game is about perpetual motion, flitting back and forth across the pitch to find space in the shade of a sleeping defender, but Ireland’s focus didn’t waver. If Denmark didn’t score it was partly because Pione Sisto and Andreas Cornelius missed their two best chances, but it was mainly because Ireland did not switch off.

Tenacity and vigilance are the sort of qualities that please managers but don’t necessarily make much impression on occasional fans. If any are prepared to come back for a second helping tonight, they should know that both managers have promised a more exciting match. O’Neill says Ireland will try to be more expansive and use the ball better, while Åge Hareide says he doesn’t have the patience to play an Irish-style waiting game.

Whatever their true intentions, the key difference between this match and last Saturday’s is that once the first goal goes in tonight, there is no longer any possible stable state in the game. In Copenhagen the sides were level throughout, and with so much at stake, the natural inclination is to play conservatively and hope your opponent makes the first mistake. In Dublin, after the first goal the teams can never be level again: whatever the score thereafter, one team will always be losing, therefore one team will have to take risks. The increased jeopardy should make for a more exciting game.

A curious feature of the build-up to the weekend was that each side appeared confident of victory – mainly because neither one knew much about the other. Now that they’ve had time to get to know each other, Ireland will be a little more confident and Denmark a little less. You got the sense that Ireland know they are physically the stronger side, and that Denmark’s advantage in technical skill is not as significant as the Danes had hoped.

David Meyler is available after serving a one-match suspension on Saturday, and although O’Neill insisted that Meyler’s presence at the pre-match press conference should not be taken as a guarantee that he would play tonight, his performance in Cardiff suggests he must have a good chance. Meyler’s strength and aggression helped Ireland turn the tide after Wales’s strong start that night, and his presence in midfield would increase Ireland’s physical edge. If he does return, Callum O’Dowda is the most likely of Ireland’s five midfielders to drop back to the bench, as Robbie Brady or Jeff Hendrick can each give O’Neill a more experienced option on the right flank.

Then there is the question of Wes Hoolahan. He has featured in 19 competitive matches for Ireland since O’Neill took over, and they have failed to score in just two of them: against Belgium in the Euros, and at home to Serbia in the recent World Cup qualifier. If you look at the eight competitive matches he missed in that time, Ireland have failed to score in three of them: against Denmark last weekend, at home to Wales earlier this year and in the Euro qualifier against Scotland in Glasgow.

Hoolahan hasn’t scored many himself – just two competitive goals, one of which was in a turkey-shoot against Gibraltar – but the team is more likely to score when he’s on the field. This is logical – he’s the rare sort of player who can find the elusive extra half-second in the tight spaces of an international match to make something happen. Since O’Neill says he believes Ireland will probably need to score at least twice, you would think Hoolahan’s skills would be at a premium.

But including him means sacrificing other things. Maybe O’Neill will want to attack Denmark with two strikers: Murphy and Long working together in front of a four-man diamond in midfield would magnify the effectiveness of both players. Although neither Murphy nor Long has scored a lot, fielding them as a pair means that Denmark have to be ready for both high balls and balls in behind.

But a two-striker formation would mean dropping one of the five midfielders who played on Saturday. If Meyler comes back in, then two of those players will miss out. If Hoolahan is to come in as well, then three of the starting five would be on the bench: that is too much disruption to the team.

O’Neill is more likely to continue with one striker, at least from the start, but including both Meyler and Hoolahan would still mean leaving two of Arter, Brady, Hendrick and O’Dowda on the bench. The most likely outcome will see Hoolahan kept in reserve, to be introduced in the event that Ireland need to change the pattern of the game. This is something Hoolahan has done before, against Germany in the World Cup qualifier in 2014 and against Italy in the Euros. All managers like to have options on the bench and, as ever, when you do well as a substitute, managers start to think of you as the kind of player they might like to bring on rather than start.

Ironically enough, if the most creative Irish player never gets on the pitch tonight, that means things are probably going Ireland’s way.