Kearney finds it hard to look past the negative in postmortem 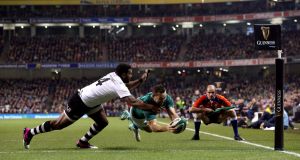 The mistake supersedes all other considerations in the immediate aftermath of the match. It’s impossible to escape the fug of disappointment. It’s not an exterior judgment, they’re Dave Kearney’s thoughts.

The overriding memory should have been his try-scoring return following a 21-month hiatus from the green jersey, or other aspects of the game – his tackling and covering, both of which were excellent, or the composure he demonstrated for a second try that was ultimately disallowed – but at the epicentre of his post-match observations was what happened in the 44th minute at the Aviva Stadium.

Ireland looked to counter-attack from inside their half, Darren Sweetnam and Andrew Conway moving play from one touchline towards to the other. The home side enjoyed a numerical advantage, a three-on-two, as Kearney received the ball. He started to run but then elected to throw a skip pass straight to Stuart McCloskey in space in the outside channel, bypassing Chris Farrell.

Fijian winger Timoci Nagusa read the intention, and had already gambled and chased the intercept, his fingertips knocking the ball into the air which he regathered and accelerated 35 metres to dot down under the Irish posts; from 17-10 ahead, the game was suddenly delicately poised at 17-17 in what proved to be a calamitous five-minute period either side of half-time where Ireland conceded two tries.

Kearney explained: “I didn’t see him at the time. I tried to whip the ball across to, I’m not sure who was on the very edge [it was Stuart McCloskey]; Stuart yeah. He had a nice bit of space but I didn’t [get him the ball]. I saw him [Nagusa] pop it up in the air and he grabbed it. [It’s] disappointing but I’ll learn from that.”

In terms of the alignment the three Irish players were a little flat in that moment, if they’d kept a bit of depth then Nagusa couldn’t take a punt on going for the interception; a case of could have, would have, should have. Kearney though shoulders the responsibility, sees it as his error.

He explained: “[It was] great to be back firstly. It’s been a year and a half [February 2016] since I last got to put on a green jersey. It is a long time. It is a great feeling to be back out there and I enjoyed it. Personally the first half went well, a couple of nice touches, a couple of decent tackles but obviously disappointed to give that intercept pass away. That’s dampening my performance a bit.

“Yeah, of course I’ll take the positives out of it as well, it’s just straight after a game you think about the negatives, you don’t really think about the positives that much. But Joe [Schmidt] said to me afterwards that there were still some positives in that performance as well, which is good to hear too.” The Ireland coach name-checked Kearney and Sweetnam for the work in covering the pitch.

Kearney enjoyed his try, might have had a second but for a knock-on. “It was nice to get in the mix again and feel part of the squad, part of the team again because like you said it’s been a long while out. It’s always nice to get on the score sheet but like I said that pass I threw probably ruined the try I scored [in how I’m feeling now].

“It’s great to feel that buzz again of playing for your country and it’s always a step up even from playing the big games for Leinster. You get to represent your country, just the whole build-up to the game, the day of the game and you get to sing the anthem again, and face the Fijian war dance, that’s all brilliant and it probably gives you an extra bit of motivation.”

Ireland play Argentina next Saturday and the priority for Kearney is to knuckle down in training and work hard, potentially without the immediate reward of a place. Conway, who had a fine game at fullback against Fiji, and Jacob Stockdale were both try scorers against South Africa, when playing on the wings, and are likely to wear the number 14 and 11 jerseys for the final November Test against the Pumas.

“I know the competition that’s there in the back three and when you get a chance you have to take it as best you can because there are always lads who can come in straight away; there were lads last week who did well on the wings. So I just need to play well and try and get back in the team.”