Mustafi calls for consistency after Arsenal’s convincing win over Tottenham 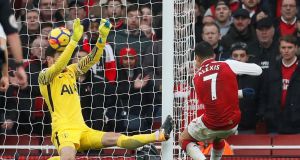 Lee Dixon tells an eye-opening story in the film 89 about being pinned up against the wall of the dressing room by his own team-mates before his first north London derby. He was warned, in no uncertain terms, that if he did not perform in this game of all games he would be in trouble.

It is hard to imagine that in the modern game such threats would be part of a pre-match routine, but the words said within the Arsenal camp last week to gee them up for the visit of Tottenham Hotspur certainly had a motivating effect.

In the intensity of their play, in their body language, this was a different kind of Arsenal to the one that has a tendency to freeze up and feel the fear creeping in during high-pressure games. They seemed to relish the situation. Héctor Bellerín let out some kind of primal roar as he headed down the tunnel at half-time in recognition of a two-goal lead his team would not relinquish. Mesut Özil at one point hoiked an agricultural clearance 40 yards straight up into the air – as un-Özil-esque a technique as you could ever imagine – to clamourous acclaim. Alexis Sánchez rediscovered his appetite for careering around the pitch chasing every cause going.

One of the key figures in galvanising Arsenal was an unexpected one. Shkodran Mustafi has had a mixed experience since joining the club in the summer of 2016. Some promising performances, some ropey ones, spells out injured, suggestions the German might even move on after one so-so season. Mustafi had been absent for seven weeks before being recalled to the three-man defensive unit that formed the platform for Arsenal to take on a Spurs side generally billed as favourites in the pre-match discourse. He tackled a vital game as if it mattered to every fibre of his being.

‘We always believe in ourselves’

Afterwards he contemplated the question that foreign players might not be perceived as caring about a derby as much as locally born counterparts. His no-nonsense reply suggested the old fashioned pin-your-team-mate-against-the-wall routine might chime with his wholehearted personality.

“That’s you guys thinking it,” he said. “As always – Arsenal is dead. Arsenal is not coming back. It’s always the same. It’s about what the team is thinking and – feeling. We keep saying it that we are always alive, we always believe in ourselves, we always try to give everything on the pitch. Obviously when it comes to games like this you have to show character. We showed a great character, when we had the ball but also when we didn’t have it.”

Their efforts without the ball were cranked up and what a difference that made as a foundation for a strong performance. When they got the benefit of some tight calls by the officials they were in the mood to make the most of it.

Arsène Wenger was particularly complimentary about Mustafi’s influence, vocally as well as his impact reading the game with obvious determination at both ends of the pitch. “He’s a leader, he’s a motivator,” the manager said. The unit, with Mustafi partnered by Laurent Koscielny and Nacho Monreal, snuffed out the attack of Harry Kane, Dele Alli and Christian Eriksen, and Wenger liked the leadership that came from the back. “Sometimes one word – ‘go a bit more wide, go a bit more left, drop off’ – makes a complete difference. Because it’s like you have a photo of a team when you play at the back.”

Mustafi thinks Arsenal must strive to hit those levels more regularly. “It’s about being consistent. That’s our goal every day in training because you are only as good as your last game. If you win today and lose next weekend you are back where you were.”

Mustafi’s straight-talking was evident as he responded to queries about how close he came to leaving Arsenal. “You [reporters] like to get the s**t, the biggest s**t. That’s your job,” he said. “People outside, talking and thinking that they know everything. What happens in the changing room is the real thing. I don’t understand why people just talk about things they cannot know about. If I have been talking to clubs or if I haven’t, it’s only rumours. Obviously there are so many newspapers, they need something to write because it’s boring if the paper is empty.”

Having helped the defence to do their job, Mustafi enjoyed how Arsenal’s front trio of Sànchez, Özil and Alexandre Lacazette pushed high up the pitch to put their opponents under pressure. How important are Sanchez and Özil to this team? “You want everyone to leave, don’t you? We need the players, not everyone can leave. They are big players. Alexis, Mesut, they can create chances and score goals. Obviously everyone in the team wants them to stay here but in the end they choose. It’s their careers and they choose what decision they make.”

Emotions ran high on both sides of the divide. Mauricio Pochettino aired his frustrations, with officials, himself, and although he is not keen to criticise his team, he did acknowledge they were not at their best.

The predicted power shift in north London remains on hold.