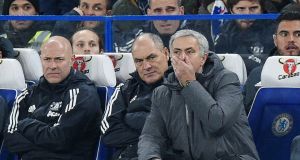 There were 62 minutes on the clock at Stamford Bridge when Henrikh Mkhitaryan looked with hollow defeated eyes towards the sideline and saw that his number was up. Manchester United needed a goal, and José Mourinho was doing what he always does when his back is against the wall: sending on the big man and sticking it in the mixer.

It was easy to forget that United had at one point threatened to offer something more. Chelsea’s preparations for the game had been disrupted by a reported falling-out between Antonio Conte and David Luiz, who had apparently disagreed with elements of Conte’s analysis of his defending in the 3-0 defeat to Roma. Roman Abramovich had dropped by the training ground during the week, which is always a bad sign for a Chelsea coach after a bad defeat.

Abramovich likes David Luiz, naturally enough: most Chelsea fans do. Past Chelsea managers have complained that they felt compelled to pick certain players, such as Branislav Ivanovic, who were favoured by Abramovich. Not only did Conte drop Luiz from the squad, he remarked before the game that Chelsea’s hierarchy should be happy to see Andreas Christensen in the team because “the club like to play with the young player”. Here is a man who would rather be sacked than pushed around.

Encouraged by the disunity in the opponents’ ranks, and knowing a win was necessary to keep Manchester City in striking distance, Mourinho went with a more positive approach than he had used against Liverpool and Tottenham. United’s defensive line was pushed 15m higher up the pitch and the wing-backs, Ashley Young and Antonio Valencia, were pressing in the Chelsea half.

The problem for United is that this gameplan went against all of the usual habits that Mourinho encourages. Aggressive defence is an all-or-nothing sort of game, and the players who have to be most committed are the defenders. A pressing team needs defenders who are prepared to run forward and challenge when their instinct tells them to drop off.

Getting defenders to play against their instinct in this way requires a lot of training and match practice, which is one reason why teams that normally defend deep will struggle to transform into proactive pressing machines when their manager decides to flick the switch.

United had no discernible attacking gameplan beyond clipping balls into the areas behind Chelsea’s wing-backs and hoping something happened from there, so the more positive overall approach made them look flimsier in defence without any corresponding benefit up front.

Chelsea had already exposed United’s uncertainty whether to push up or retreat on a few occasions before Cesar Azpilicueta’s early delivery caught their defence in disarray, allowing Alvaro Morata to head what proved to be the winning goal.

Later Mourinho explained that he could not be blamed for the goal as he had thoroughly briefed his players on the way that Chelsea often try to create scoring chances with balls whipped towards the far post from central areas. When they don’t listen, what can a manager do?

United’s frantic response to going behind told you that they had at least listened to Mourinho’s comments after their defeat at Huddersfield, when he questioned their attitude. At Stamford Bridge they looked like a team that feared the consequences of defeat. They went at Chelsea in the last half hour with something close to desperation.

But desperation often makes for bad decisions – hurried shots, overhit passes. On 82 minutes a Chelsea attack ended with the ball in the hands of David de Gea. Without even waiting for Fellaini to trundle forward into Chelsea’s half, de Gea launched it 70 yards downfield where it was headed back by Gary Cahill, and within three seconds United were again under pressure.

It was rank bad play of a type that would infuriate Guardiola, who tells his players “the faster it goes forward, the faster it comes back”. But Mourinho has no such principles – that stuff is for the poets, philosophers and “Einsteins” at whom he frequently scoffs – and didn’t United score from just such an attack against Tottenham last week? De Gea was just doing what Mourinho would have done.

After the match Mourinho made a point of praising Fellaini, and nobody could deny that the Belgian had made a big impact on the game. He elbowed Alvaro Morata in the head, and gave away the ball twice in dangerous areas, but got away with it. He also won eight aerial challenges – twice as many as any other player on either side even though he spent only 30 minutes on the pitch – and created two chances, which was as many as all of his team-mates combined.

A player so extraordinarily intimidating and dominant in the air will give any long-ball team a chance. The point, obviously, is that Manchester United surely haven’t spent £322 million on new players since Mourinho joined just to become history’s most expensive long-ball team. When you have your pick of the world’s elite talent you have to do better.

The comparison with the progress Guardiola has made with Manchester City – in the same time, with a similar level of spending – is embarrassing for Mourinho. Guardiola’s squad contains several players who are currently playing the best football of their lives. Mourinho’s squad contains just one.

That player is Fellaini, who, like a lot of footballers, flourishes when the team is built around him. United’s problem is that they have a manager who builds his team around a player like Fellaini rather than one like Kevin de Bruyne. As long as that remains the case, it’s hard to see how they can keep up with the best.