Everyone knows the top-level football is elsewhere, but it’s not about that anymore 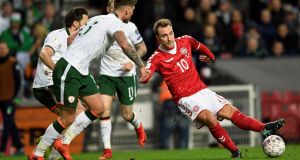 It’s not that long ago that Irish hackles used to rise when a foreign manager – usually Germany’s Joachim Löw – was asked to analyse the Ireland team ahead of a qualifier, and replied with a string of cliches that suggested he had last seen Ireland play at some point during the Charlton era. Fighting spirit, physical strength, passion, determination, long balls, etc . . .

This was annoying because under McCarthy, Kerr, Staunton and Trapattoni, the Ireland team more often consisted of slight, skilful players mixed with slight, not-so-skilful players, and the only one who really fit the old “physically dominating” template was Richard Dunne. It felt as though Ireland were trapped by their past, that their identity could never evolve – at least as far as anyone outside Ireland was concerned.

The same old stereotypes have been deployed liberally by the Danes in the last few days.

And yet the cliches have lost their power to sting. This is partly because they are true again. When Daryl Murphy is one of your smaller players, as was the case in the Ireland XI that started against Wales, you realise you have once again got a physically imposing team.

But the other reason is that we are gradually ceasing to care. We are starting to wake up to the reality that Ireland are no longer capable of playing what is today considered “good” football. But we are not alone. Almost no international team can. International football is not really about football anymore.

Pinnacle of the sport

There was a time when the international level was the pinnacle of the sport, when even the best club squads could not compare to those of the best countries, like Brazil and Italy. This was true until around 1990, when West Germany won the World Cup, and most people probably still thought of international football as the top level 10 years later, when France were winning Euro 2000.

But by then the change had already happened, driven by political, economic and technological shifts. The removal of obstacles to international movement, the rapid progress of communications technology, the influx of pay-TV money at the top level of club football, and the establishment of the Champions League are among the factors that enabled the big clubs around Europe to start building squads of a scale and depth of quality that had not been possible before.

Clubs like Real Madrid, Milan and Manchester United could now assemble 20 or so of the best players in the world and have them train together day after day with access to the best of coaching, nutrition, sports science, and so on.

The result is that football at the top level swiftly evolved into what was effectively a new sport: faster, more skilful, more explosive, more tactically sophisticated than anything we had seen before.

International football has been left behind. Only a couple of countries are lucky enough to have a collection of native talent comparable to the concentrations of international talent you now find at big Champions League clubs.

Even in the rare cases when the squad is good enough, there is still the problem of limited training time. Champions League knockout football is an intensely choreographed, collective endeavour, and it is impossible to develop this level of collective understanding when your players only train together for a few days every couple of months.

This is why the only international teams who can play football at a Champions League level are those which can draw their players from one or two successful Champions League clubs. Germany’s 2014 World Cup winners were largely from Bayern and Dortmund, while Spain’s 2010 team overwhelmingly came from Barcelona.

And then you have teams like Ireland and Denmark. Consider a moment in the first half at the Parken stadium, when James McClean received the ball on the left. A few yards behind him, Stephen Ward saw that there would be space ahead on the outside, and set off to exploit that space with an attempted overlap.

Except there was no space, because rather than drift infield to allow Ward to run past him down the line, McClean took the outside line himself, blocking Ward’s space and effectively playing his team-mate out of the game. McClean’s error turned a two-on-one into a one-on-one, and Denmark mopped it up easily. It was the sort of mistake that has been completely eradicated at Champions League level, but we have to accept that most international teams can’t get anywhere near that level these days.

Some might wonder why this should necessarily be so. Denmark, for instance, had a fantastic team in the 1980s, which stood comparison with the best European clubs of the time. Why couldn’t that happen again?

Actually, the football only looks bad compared to what we have got used to seeing in the Champions League

The reason is that international football has become a less forgiving environment for skilful players who want to play off-the-cuff. The one big difference between international football now and then is that players generally have a much higher level of fitness, and all are familiar with the principles of pressing. This means that creative players have less time and space to play than they once did. If you look at the old footage of Denmark in the 1986 World Cup, you see that the creators like Jan Mølby and Michael Laudrup often have an almost comical amount of time to decide what to do with the ball.

Compare that to Christian Eriksen’s experience on Saturday night. Ireland’s midfielders were working ceaselessly to block passes to him, and whenever one did reach him, he immediately had Harry Arter or Robbie Brady snapping at his heels. At Spurs, Harry Kane or Dele Alli know him well enough to help him beat the press with rapid one-touch combinations, but his Danish team-mates often failed to read his intentions. It’s much harder for skilful players to look good now that even the most basic international teams are fit enough to press like Sacchi’s Milan.

For years, pundits around Europe have been slamming their national teams for playing bad football (it happens everywhere, but because few people ever watch anyone else’s national team, everyone thinks their own pundits are uniquely harsh). Actually, the football only looks bad compared to what we have got used to seeing in the Champions League.

Luckily, the football is no longer the point. The World Cup used to be about crowning the best team in the sport, but that is plainly no longer its purpose. Everyone can see that the best teams are elsewhere.

Now that fans can turn the cameras on themselves, they have become the stars of their own movie

But while what happens on the field may never have seemed less interesting, what happens around the games has never been so richly or lovingly documented. In the age of social media, international football has evolved from a serious sporting endeavour into a form of themed mid-market tourism.

Ireland never had a chance of winning an international tournament on the field, but we are the Brazil of international football’s banter era. The world rejoiced as the Irish fans recorded and broadcast countless examples of their own wit and charm at the Euros in France, and there was more of it in Copenhagen when a group of Irish stood outside a branch of Victoria’s Secret and cheered unsuspecting customers as they emerged.

When it clicks with you that international football isn’t about football anymore, you stop being disappointed by mediocre football matches. So what if Ireland completed barely half of their passes against Denmark? It’s tough to pick a pass out there, and anyway it’s beside the point.

Now that fans can turn the cameras on themselves, they have become the stars of their own movie. The team is no more than the vehicle for the fans’ performance. Like a tournament camper van, it doesn’t have to look good. All it has to do is get them there.