Ken Early: Neymar intent on being best-paid if not the best

World's most expensive soccer player says he is "not motivated by money" and his "heart chose" him to go to PSG. Video: Reuters 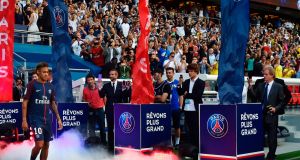 Paris Saint-Germain’s Brazilian forward Neymar arrives on the pitch during his presentation to the fans at the Parc des Princes stadium. Photograph: Alain Jocardalain/AFP/Getty Images

The partnership broke down last year and so we’re back to having two awards: Fifa’s “The Best Men’s Player” and the France Football Ballon D’Or. So which is the big one? Is it the one that can trace its history back to 1956, when the first Ballon D’Or was presented to Stanley Matthews? Or is it the one that comes with the imprimatur of the world governing body?

It’s neither. The most-coveted individual honour in football is decided by financial journalists who might never watch a football match all year. It’s the Forbes List of the World’s 100 Highest-Paid Athletes, which the American money magazine has published every year since 2012, and when we tally the football players who have made it to the top of that most-exclusive list, it’s Cristiano Ronaldo 2, all other footballers 0.

Forbes reckoned Ronaldo made $93 million last year, with $58 million in salary and $35 million in endorsements.

That was $6.8 million more than second-placed Lebron James, and $13 million more than Lionel Messi in third. You have to go down to number 18 to find Neymar, sandwiched on $37 million between Dwyane Wade and Tiger Woods (Woods won just $107,000 on the golf course but topped that up with $37 million in endorsements).

Neymar is the fifth-youngest athlete in the top 100, so time is on his side. And he knows he could not be doing more to advance towards the ultimate goal.

His gross salary at Paris Saint-Germain of around €55 million would have been the highest in world sport last year, and his new association with Qatar Sports Investments will take his sponsorship appeal to the next level. With the euro strengthening steadily against the dollar, it’s all coming up Neymar.

Neymar has abdicated his position at Europe’s top club, where he was part of football’s most celebrated front three, partnering the other two great South American forwards of his age.

He moves to play with inferior team-mates, in the continent’s fifth-strongest league, for a club that nobody took seriously until it was bought by Qatar six years ago. No great footballer has ever willingly accepted such a demotion for money, but Neymar is a player of unusually single-minded focus.

You just wonder why he’s being so coy about his reasons. Speaking to journalists last week after being unveiled as a PSG player, Neymar’s face tightened every time somebody suggested he had moved to PSG for the money.

“What I say to these people is they don’t know anything about my personal life. I was never motivated by money. I’m really sad that people still think that way. I didn’t come here for the money, I came here for the motivation of the challenge.”

Which challenges did Neymar mean? Surely he can’t have meant the challenge of winning the French League, which PSG had won for four seasons in a row until Monaco surprised them last year. Many of the best Monaco players have since left to go play in serious leagues, so PSG are 2/11 to take their title back.

If he meant the challenge of winning big trophies and prizes – the Champions League, the Ballon D’Or – well, it will certainly be more challenging to win these things with PSG than with Barcelona; if he wants to add to his tally, he has gone to the wrong place.

Perhaps it was the challenge of becoming more distinctively himself; that moving will allow him to fully express his own genius after years of being eclipsed by Lionel Messi.

This only makes sense if for some reason you think it’s bad to have a team-mate as brilliant as Messi. Messi did more to make Neymar look good than anybody; 20 of Neymar’s 105 goals were assisted by Messi.

At Barcelona, Neymar already faced the hardest challenge in football, which is to play alongside Messi and look like the best player in your team. He’s given up on that to join a league where there aren’t any players half as good as Messi. This is not the behaviour of an athlete who loves a challenge.

Neymar could learn from the candour of Conor McGregor, who admitted last month that he had agreed to fight on a UFC card in December purely because he thought it would help him get to the top of the Forbes list (he’s currently six places behind Neymar, but both are set to rise).

McGregor’s attitude to his sport has always been that it is a means to an end: “Get in, get rich, get out”. Whenever anyone doubts the wisdom of his decision to fight Floyd Mayweather in a different sport, he simply points out that he is set to triple his net worth.

You may not respect those values, but you can respect the fact that at least McGregor is not insulting anyone’s intelligence, or pretending to be something he’s not.

Neymar should stop talking nonsense about challenges and admit he went to Paris to be the best-paid player in the world – because money is how players keep score now. If he can’t be uncomplicatedly proud of his money this is going to be a tough couple of years, because everything else about the move is an embarrassment.