Ken Early: What the Dickens? Spurs’ scrooges called out by Rose

This is the premiership, not ‘Oliver Twist’, and Rose was right to ask for more money 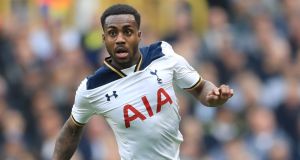 Tottenham Hotspur’s Danny Rose: Spurs’ revenues have increased by 50 per cent, thanks to the efforts of players like Rose, but very little of this increase has been passed on to the players. Photograph: John Walton/PA Wire.

Last Friday, in his first pre-match press conference of the new season, Pep Guardiola was asked to name his favourite memories of the first 25 years of the Premier League.

So Guardiola’s answer was a magnificently undiplomatic non sequitur, but his point was a sound one. The Premier League may not be the best in the world, but it is rich. Deloitte projects that the 20 Premier League clubs will make €5.1 billion between them this season – 60 per cent more than the clubs of the world’s second-richest league, Germany’s Bundesliga. English football ceaselessly congratulates itself on its financial success to the point that the Premier League’s money is the most famous thing about it.

There is one club that seems to have missed the memo.

Tottenham’s full-back Danny Rose caused a sensation last week when he claimed in an interview with the Sun that he felt underpaid. “I know what I am worth. As with everyone else in my team, in my opinion, I am worth more than I am getting.”

What a surprise that the plutocrat Alan Sugar finds it “disgusting” when a worker dares to suggest that they might be due a raise. A cursory look at Rose’s situation shows the Apprentice host’s words for the sub-Trumpian nonsense they are.

Spurs’ chairman, Daniel Levy, is renowned as a hard-nosed negotiator, and when you compare Spurs’ revenue to the salaries they pay their players, you can see why.

According to the most recent figures, which cover the year to June 2016, Spurs’ wage bill was around £100 million on turnover of just over £200 million, for a wages-to-turnover ratio of less than 50 per cent. The historic average for the division is just over 60 per cent, so Levy’s cost-control regime already looks aggressive.

But the picture has changed dramatically since those figures came out. First, the new Premier League TV deal kicked in, increasing Spurs’ revenues by £53 million in 2016-17. Second, thanks to the brilliant efforts of Rose and his team-mates, they competed in the Champions League, bringing in an additional £40 million, and qualified again for this season’s edition. So the equivalent figures for 2017 will show Spurs with an income of around £300 million.

The reason Rose and his team-mates are annoyed is that Spurs’ revenues have increased by 50 per cent, but very little of this increase has been passed on to the players. Tottenham’s top earner is Harry Kane on £100,000 a week. Even if Spurs were to put every member of a 25-man first-team squad on £100,000 a week, the total wage bill would be only £130 million – a measly 43 per cent of a £300 million turnover. The true figure will therefore be even less.

The players’ mood will not be improved by the knowledge that the regime of parsimony that keeps their wages far below the levels of their counterparts at rival clubs does not apply at board level. Levy’s reward for keeping costs under such strict control is to be the best-paid director in the Premier League, taking home £2.6 million for his work in the 2014-15 season.

Levy should be proud of what his team has achieved. Liverpool, for instance, pay their squad nearly twice as much as Spurs pay theirs, yet they have finished below them in the league for the last three seasons.

But Rose’s comments show that Spurs’ players can see what is going on and they are not happy about it. It’s testament to how excited Tottenham’s players have been to be part of such a good team that this resentment has not been more of an issue before now. But as they get used to the idea that they are among the best teams in the league, the question of why they are not among the best-paid will only become more urgent.

Towards the end of last season, Levy and his board met with the board of the Tottenham Supporters’ Trust. The Trust’s co-chair Martin Cloake asked whether the team’s on-field success had caused upward pressure on wages. According to the minutes, “DL said that all players were under contracts, contracts they were happy to sign at the time. They would be expected to honour those contracts. They wouldn’t have had a reduction if things had gone badly.”

Insisting that contracts be honoured is all very well in principle, but it does not address the question of why Spurs’ players should be prepared to settle for a historically low share of the club’s revenue. Consider the context. This is the summer of Neymar, of record inflation in transfer fees and wages. A few years ago, a top Premier League full-back like Rose would have been delighted to earn £65,000 a week. Now, he feels like his employers are taking advantage, and he knows that better deals are on offer elsewhere.

In July, Levy described the spending in football as “unsustainable”, but he has to say that to justify his regime of austerity. Unless he accepts that his players deserve a greater share of the rewards, the thing that looks unsustainable is Tottenham’s team spirit.