Ken Early: You can’t ‘run’ a game without a well-run team 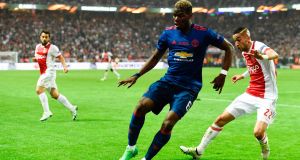 TV3 can congratulate itself on a great season of European football coverage, but nobody’s perfect. On Wednesday night, after the Europa League final, Graeme Souness criticised Paul Pogba in terms that deserve closer analysis.

Souness disagreed with host Tommy Martin’s suggestion that Pogba was capable of “brilliance”.

“You spend that kind of money to make a difference in the big games,” he said. “I don’t see him changing the big games because of the ‘brilliance’ he’s shown. He does eye-catching stuff, which with all due respect to people who don’t understand the game so well, they go ‘wow, wasn’t that great play?’ What I see as a midfield player, an old midfield player, is someone that’s not really got a great understanding of the game . . . I’ve never seen him run a game.”

Who are the players who run games? The best example in the last 10 years is Xavi at Barcelona. The closest thing to Xavi in the current Spanish league is Toni Kroos at Real Madrid. Xabi Alonso has just finished three seasons dictating proceedings in midfield at FC Bayern Munich. The best recent example from Italian football is Andrea Pirlo. The closest current player at Manchester United is Michael Carrick.

What do these players have in common? First, they’re all slow. Often these guys are the least impressive athlete on the field. They are the players who were so slow that they had to develop a high degree of tactical insight at an early age, because otherwise they’d have been sitting on the bench.

As Xabi Alonso told the Times: “My job was to be a solution for my team-mates. I wasn’t going to be the player to dribble past two opponents and strike from 30 yards. For the ones that could, I could make their job easier.”

It wasn’t that Alonso felt a proper footballer should be above the cheap thrills of dribbling and goalscoring. He would have been that type of player too, if he’d had the ability. But he didn’t, so he had to figure out what it was he could do, and concentrate on that instead. Most unselfish, team-minded, tactically intelligent players have a similar story.

Pogba is a different kind of player – the kind who had it all from the beginning. Steven Gerrard and maybe Gareth Bale are similar cases in recent English football history, players with so much athletic and technical ability that they never had the same early pressure to develop the tactical side of their game.

That’s not to say that Pogba will never “run games”. Paul Scholes and Ryan Giggs both figured out how to become that type of player as they slowed down later in their careers. It’s impossible to become a top dribbler or goalscorer without some exceptional physical characteristics, but the ability to dictate a game from midfield is something that you can learn and master.

But the first thing that you’ll learn is that it’s not all about you.

If you think again about the game-runners – Xavi, Kroos, Alonso, Pirlo, Carrick, Scholes – you’ll see there is something else that they have in common. Whenever they were running a game, it happened in the following conditions, or something very like them.

They had two attacking full-backs, who ran up and down the field non-stop, providing passing options outside. They had two central defenders behind who passed the ball to them to get moves started. They had two partners close by in central midfield, making angles for short passes and one-twos. And ahead they had three attacking players who moved constantly in search of space.

In other words, they were at the hub of a highly-organised unit designed to give them more than one passing option every single time they were in possession.

Contrast that to Pogba’s situation at the United of José Mourinho. Whenever Mourinho has a difficult game – the kind on which Souness judges Pogba – he plays a back six, with the wide attackers acting as auxiliary full-backs, and the actual full-backs forbidden to cross the halfway line.

The central defenders are discouraged from making “first station passes” – that is, they are told not to pass the ball to the central midfielders. The midfielders are usually asked to do specific jobs – covering, marking or otherwise nullifying opponents – rather than being given license to invent the game. Up front there is only one striker, and mostly that’s been Zlatan Ibrahimovic. Zlatan has many admirable qualities, but perpetual movement is not among them.

These tactics are good for keeping clean sheets, but bad for any player with ambitions of “running the game”. United frequently have less than 40 per cent of possession in big games, and Mourinho is quite satisfied with this – indeed it is his intention. It’s no accident that all Pogba’s best moments this season have been improbable 50-yard passes to Zlatan, or shots against the woodwork from 30 yards. It’s hard to “put your foot on the ball” when the whole point of your manager’s tactics is literally to let the other team have the ball.

When he criticises Pogba for not running games, Souness ignores the context in which Pogba has to perform. Nobody could run the game in this team. It’s the same mistake made by the old Italian pundits who dismissed Dennis Bergkamp when he floundered at Inter in the mid-1990s. In his book, Stillness and Speed, Bergkamp described his predicament at Inter. The ball would be booted out of defence, Bergkamp would get onto it, look up, and realise he was the only Inter player in the opponent’s half. And nobody was coming to help.

They expected him to run 40 yards, holding off defenders, and score. Maybe that was possible if you were a bull like Batistuta or Ronaldo, but Bergkamp was not that type of player. He was used to playing in the Ajax system, surrounding the opposing penalty area with team-mates he could pass to. Without players nearby to combine with, he was nothing.

The Italians decided Bergkamp was rubbish. It turned out they were the ones who didn’t get it.