Ken Early: The rest of Ireland’s campaign is about holding on 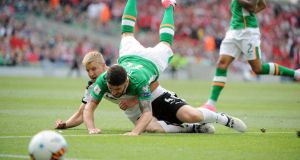 “I know, in this day and age, the slightest wee thing you say about a referee you get fined and that, but . . . you watched the game. You tell me. They had a 12th man today. And that’s all I’ll say about that.”

That’s one of the things people like about James McClean: he always lets you know how he feels. And when you had been watching in real time the decision to disallow Shane Duffy’s late goal looked wrong.

Of course it’s going to look a bit like a foul when a 6ft 4in centre back like Duffy takes a running jump at a 5ft 9in full back like Stefan Lainer and both players end up in the net. But how else is Duffy supposed to get to a ball he’s entitled to go for? It seemed as though the Spanish referee, David Fernández Borbolán, was penalising Duffy for being big. Maybe you don’t see too many goals like this in La Liga, but that doesn’t automatically make them illegal.

On the replays, though, you could see that Duffy had run in leading with his left arm, which made contact with Lainer before either had touched the ball. The ball had bounced in off Duffy’s left shoulder, by which time Lainer was already being propelled back behind the goal line.

We know that in Britain the goal probably would have stood. A few months ago Marcos Alonso of Chelsea jumped into Héctor Bellerín of Arsenal with a leading arm in a similar kind of situation. Chelsea were awarded the goal; Bellerín was stretchered off with concussion. Arsène Wenger complained that it was dangerous play, and he was obviously correct.

But soccer in Britain has never really minded much about dangerous play. That’s why Cyrus Christie and not Séamus Coleman was playing at right back for Ireland yesterday. We were all angry about Neil Taylor’s over-the-ball challenge on Coleman, but we can’t complain about one kind of dangerous play only to insist that our players should be allowed to get away with another kind.

Whether or not Ireland’s grievances were legitimate you could understand their frustration. The last 10 minutes of the match had packed in all the intensity that had been missing from the previous 80. Ireland had not played well for most of the game, but with Austria growing nervous, and dropping deep to protect their lead, the home side were at last imposing themselves. Had the game continued for another few minutes, you felt, they would have won.

They had started the day expecting to win. Austria were missing several first-teamers; morale within Austrian soccer had collapsed to the point where players were prioritising things like their weddings ahead of the game.

Yet the only positive from the first half was the assured performance of Kevin Long, who was making his competitive debut. The Burnley defender won everything against Guido Burgstaller in the air. Otherwise it was a poor 45 minutes from Ireland, who lacked compactness, moved the ball ponderously and left Jon Walters hopelessly isolated in attack.

Austria’s centre-back Aleksandar Dragovic was beating up on the lonely Walters, slamming into the Irish centre forward from behind whenever they found themselves contesting the same high ball. An early booking would have forced him to play within the rules, but the card did not arrive even when Dragovic cut out an Irish counter with a flying goalkeeper-like save on the near sideline.

There was little for the Irish crowd to get excited about until McClean decided to get things going by smashing into the Austrian playmaker, Zlatko Junuzovic, with a challenge that could be described as hard-but-fair-but-not-really. The crowd roared its delight, but Lainer, who was later to be levelled by Duffy in the goalmouth, marched up to McClean and barged him from behind, to let him know his card was marked.

Sure enough, two minutes later McClean tried to control a pass only for Lainer to come in from behind with a high boot. They stalked each other until half-time, with Lainer on a couple of occasions very obviously getting rid of the ball early as he knew McClean was closing in for another forceful tackle.

There was another flashpoint between the same pair in the build-up to the opening goal, as McClean seemed to have flicked it past Lainer only for the defender to stop the ball with his hand. Ireland protested, but Borbolán didn’t stop play, and Austria went up the other end to win the corner from which they scored their goal.

Austria themselves might have felt aggrieved that Borbolán saw nothing wrong with the move that led to Ireland’s equaliser. A long clearance by Brady bounced in behind the Austrian defence, with Walters chasing after his tormentor Dragovic. As the Austrian tried to control the ball, which was about to take its second bounce, Walters bumped him out of the way and lashed the bouncing ball past the keeper at the far post.

His goal meant that Ireland remain in a strong position in the group – stronger, certainly, than their position in Euro 2016 qualifying, this time two years ago, when a 0-0 draw at home to Scotland left them fourth in the group with four games to play. In that campaign Ireland fought back, knowing they had nothing left to lose. This time it’s about hanging on to what they’ve got.