Ken Early: Lure of La Liga will exist for as long as pay gap does

Former Liverpool footballer Philippe Coutinho says it is a "dream" to have completed his transfer to Spanish giants Barcelona. Video: Reuters 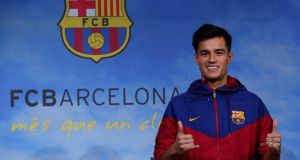 Barcelona present new signing Philippe Coutinho. “If Liverpool were prepared to pay their best players more than €20 million a year, as Barcelona and Real Madrid do, then they would find their stars suddenly become resistant to the lure.” Photograph: Albert Gea/Reuters

Everyone knew Philippe Coutinho was going to Barcelona sooner or later. Typically, Steven Gerrard was already getting depressed about it nearly three years before it happened.

“The Spanish giants, Barcelona and Real Madrid, will come looking for Philippe in a few more seasons, just like they did with Luis [Suarez],” he wrote in his 2015 autobiography. “And that’s when it will get tricky for Liverpool because the lure to go to one or two of those clubs is so strong for any South American or Spanish player.”

It’s certainly true that Liverpool’s most successful South American and Spanish players have found the lure of the Spanish big two difficult to resist. Coutinho is the latest in a procession of talent that already included Luis Suarez, Javier Mascherano, Alvaro Arbeloa and Xabi Alonso.

But it would be a mistake to think this mysterious lure only affected Latin players. Go back a few more years, to the days before any Spanish or South American player had even played for Liverpool, and remember that local boys Michael Owen and Steve McManaman also succumbed to the lure.

Even then Madrid and Barcelona had an undeniable glamour and prestige, which has only increased in the years since, as their players have won eight of the last 12 Champions Leagues and 10 of the last 10 Ballons D’Or.

Yet the key fact to remember is that no player has ever taken a pay cut to leave Liverpool for Real Madrid or Barcelona.

South American players grow up wanting to play for Madrid and Barcelona because they are the most prestigious clubs to play for. Another way to put this is that they are the clubs with the best-paid players.

That is a full million euros a year more than you can expect to make on average at English football’s top payers, Manchester United and Manchester City, both of whom pay first-teamers €5.86 million a year on average.

The only other club in the €7 million-plus range are Paris Saint Germain – and sure enough, the recently-unfashionable French club, who have never won Europe’s top trophy, have themselves begun to radiate that indefinable lure, so powerfully as to tear Neymar away from Barcelona.

The average salary at Liverpool is €4 million a year, so average first-team pay at Barcelona is higher by about €75,000 a week. A differential like that would tempt even the most ardent supporter.

But these are average figures and Coutinho is not an average player.

Discussing Barcelona’s original, failed move for Coutinho last summer, Gerrard suggested that the player, who was then feigning injury to avoid having to play a Champions League qualifier, was spooked that he might miss out on a childhood dream: “that’s why Philippe has reacted, this kid who’s come from South America, has always had a dream of playing for Barcelona.”

A month later, the details of Barcelona’s financial offer to Coutinho were published by Spiegel magazine. The offer was €115 million over five years, or €23 million a season. That was fully €14 million a year more than he earned at Liverpool, so there was a lot more than a childhood dream at stake.

If Liverpool were prepared to pay their best players more than €20 million a year, as Barcelona and Real Madrid do, then they would find their stars suddenly become resistant to the lure, even the Spanish and South American ones. It’s not as though Sergio Agüero grew up dreaming of playing for Manchester City, yet there he still is, seven seasons, 187 goals and untold millions of pounds later. But as long as the pay gap is a reality, the Lure will be too.

The question that baffled many Liverpool fans was: why does this move have to happen now, instead of at the end of the season? Coutinho could have played in the Champions League for Liverpool but is cup-tied for Barcelona. The talk is that he can play in La Liga so that Andres Iniesta can keep himself fresh for the big Champions League games – but isn’t this stunt-double role a little demeaning for a player of Coutinho’s ability? Even from Barcelona’s point of view, what was the rush?

For the answer, look no further than the folks who broke the story: Nike, whose website announced on New Year’s Eve that Coutinho was set to “light up Camp Nou”, several days before the news was confirmed by any other party to the deal.

Nike’s recent sponsorship deal with Barcelona costs them €155 million a season, making it the biggest kit deal in the sport, while their €30 million-a-year deal with Brazil was the biggest in international football when it was signed in 2008. Barcelona are the most popular foreign club in Brazil, selling more shirts there than any club except Flamengo and Corinthians.

Throughout the first half of 2017, most of those shirts would have had Neymar’s name on the back. Then Neymar unexpectedly moved to PSG, leaving no Brazilian star at Nike’s most expensive club property. Barcelona hurriedly brought in Paulinho to ensure the first team would have at least one Brazil regular, but strong player though he is, Paulinho doesn’t shift many units.

Coutinho does – and with Brazil set to challenge strongly in this summer’s World Cup, Nike decided that they couldn’t wait any longer to get one of the biggest players on their sponsorship books, who also happens to be a star for their most prestigious international team, into their highest-profile club.

It’s a dream for every player to play in the knockout stages of the Champions League and now Coutinho has to postpone that dream until 2019 – but shirt sales have started already. Bill Shankly said: “Football is a simple game made complicated by people who should know better.” Transfers are like that too.