Manchester City stretch lead at the top out to 15 points 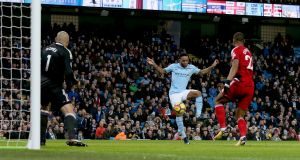 Manchester City are back to winning ways and who would bet against them reeling off another 18 consecutive Premier League victories – or more. Certainly the breezy, emphatic nature of this defeat of Watford suggests the ending of their record sequence on New Year’s Eve has merely refreshed Pep Guardiola’s side and made them doubly determined to resume their love of steamrollering opposition.

Thirty-nine seconds were all City required to take the lead. Fabian Delph threaded the ball to David Silva along the left. He recycled it to Leroy Sané who beat Daryl Janmaat for pace and crossed. Marvin Zeegelaar missed the ball and Raheem Sterling struck with a confident left-foot finish that made his total 18 for the season.

City could have doubled the advantage a few minutes later. This time Delph fed Sané, who picked out John Stones in an acre of space in front of Heurelho Gomes’s goal. But what should have been an easy second was spurned, the centre back spooning over the bar.

Guardiola had made five changes from the draw at Crystal Palace. Sergio Agüero, Stones, Sterling, Delph and David Silva came in but the headline selection was a player who retained his place; Kevin De Bruyne’s presence having been in doubt due to a heavy Jason Puncheon challenge at Selhurst Park.

Marco Silva drafted in Étienne Capoue and Andre Gray, Watford’s manager hoping his side could repeat Palace’s feat and become only the third side this season to deny City a league win. Yet going behind so early made the task all the harder. Sané was floating in behind Watford’s defence at will. On one occasion he rolled the ball into the danger area but it was not precise enough for Agüero to take aim.

City then attacked down the right for the first time and they promptly scored. Silva – again – was the conductor, releasing De Bruyne, and when the Belgian whacked the ball in it ricocheted off a hapless Christian Kabasele past Gomes.

The temptation was to consider the contest over after only 13 minutes. When De Bruyne crashed a free-kick off the bar a few minutes later – Gomes may have got a touch – it underlined City’s total domination.

A sodden Silva stood in the technical area wondering how Watford might claw their way back into the game. Guardiola, usually a fixture in the zone, signalled his content by not entering it until the 22nd minute. Yet after Stones hit a high ball intended for Sané straight out, Guardiola returned to his seat slapping a thigh in disappointment before Gray came close to pulling one back. A Nicolás Otamendi slip allowed the centre forward to race at Ederson, who protected his team’s lead with a fine save.

Towards the end of the half Sané and Agüero, twice, nearly breached the Watford rearguard and the visitors will have been relieved to reach the break only two goals down. Guardiola, though, may have been frustrated for such dominance not to have already sealed victory.

His second-half demand might have been to execute more ruthlessness. If so Agüero’s howler of a missed header early on will have displeased him. De Bruyne – who supplied the cross – tried to show the No 10 how to finish after Janmaat fouled Sané. From a tight angle on the left the Belgian hoped to beat Gomes direct from the free-kick but found only the side-netting.

City were now in their familiar attack-versus-defence mode. Sané, De Bruyne, Otamendi, Agüero, Silva, Sterling, Fernandinho: all relayed the ball in dizzying sequences that caught the eye. Whenever Watford managed to take possession they were harried out of it quickly.

Janmaat had to be alert to deny De Bruyne when Silva flipped the ball to him inside the area. He was, but it felt only a matter of time before City claimed a third.

It came on 63 minutes and was too simple as again Watford made an error. De Bruyne hit the ball in from the right, directly at Gomes, but the goalkeeper spilled it and the lurking Agüero scored his 16th of the campaign.

A little later Guardiola took off Stones for Danilo and followed this by swapping Yaya Touré on for Fernandinho. The manager had enjoyed a smiled with the Ivorian as he entered the pitch and there was a long embrace for the Brazilian as he exited. Guardiola was not happy with Gray’s consolation goal, however. André Carrillo moved past Kyle Walker, who stumbled, and from the left found Gray for an easy finish.

City, though, thoroughly deserved the win. There will surely be many more this season. – Guardian service