Playmaker will be unveiled on Monday, after Catalans extended lead at top of La Liga 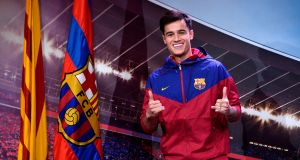 Barcelona’s new Brazilian midfielder poses for a picture with a Catalan flag and a Barcelona flag. Photograph: Getty Images

Lionel Messi marked his 400th LaLiga appearance with an early goal as leaders Barcelona beat Levante 3-0 at the Nou Camp to restore their nine-point advantage.

Philippe Coutinho has headed to Catalonia to complete the formalities of his £142million (€160m) transfer from Liverpool, but it remained business as usual for Ernesto Valverde’s men on Sunday afternoon as Messi opened the scoring after 12 minutes.

In-form Luis Suarez, who himself left Anfield for the Nou Camp during the summer of 2014, added a second before the break and Paulinho tapped in a late third as the Blaugrana consolidated first place ahead of Atletico Madrid, who had beaten Getafe on Saturday.

Midfielder Ousmane Dembele, fit again after suffering a hamstring injury on his LaLiga debut following a €105m move, came back into the starting XI, while Barcelona captain Andres Iniesta made his 650th appearance.

Barcelona will officially unveil Coutinho on Monday, the Catalan club have announced, and he was at the Nou Camp to watch his new side on Sunday. The 25-year-old Brazil international will perform a ceremonial signing of his contract before a photo shoot on the pitch and a press conference.

After a positive start from Levante, who had lost all 11 LaLiga games at the Nou Camp, Barcelona swept into the lead.

Jordi Alba nodded the ball back out to the edge of the penalty area, which dropped straight into the path of Messi, and the Argentine playmaker sent a half-volley in off the post.

It was Messi’s 365th league goal for Barcelona — and the hosts were soon looking for another as Dembele’s effort was saved, with Suarez sending the rebound just over.

Levante offered a threat at the other end on 19 minutes when Marc-Andre ter Stegen had to be alert to push a low shot from Ivi Lopez behind.

Barcelona, though, added a second after 37 minutes.

Sergi Roberto was played clear on the overlap down the right, and he cut the ball back to Suarez, who took the ball in his stride with a fine first touch before crashing a volley in off the underside of the crossbar.

Levante almost reduced the deficit at the start of the second half when Lopez again forced Ter Stegen into a fine reaction save.

The Barcelona keeper had to be alert again on 65 minutes as he stuck out a leg to block a low shot from Shaquell Moore, who had ghosted in at the far post.

Suarez, who had scored four goals in his previous three LaLiga matches, was sent clear by a long pass from Javier Mascherano. The striker’s first scuffed shot was blocked and his angled effort from the rebound saved at the near post by Olazabal.

With three minutes left, there was some concern when Alba went down clutching his knee following an awkward fall after challenge against Levante substitute Samuel. The defender, though, was able to continue following treatment.

Barcelona added a third in stoppage time when Paulinho tapped in from close range after Suarez stepped over a low cross from Messi.