Bad signings the key to Mark Hughes’ demise at Stoke 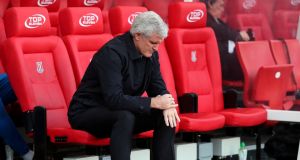 With time running out against Coventry City, Stoke City had two forwards up front, two in central midfield and two playing at wing-back. From one angle this was Mark Hughes chucking the sink at it; doing everything he could to prevent a humiliating defeat in the FA Cup third round. Another viewpoint, however, was that it was an indictment of the bad planning and organisation that has led to the Welshman losing his job after four and a half years at the club.

Hughes was hired in May 2013 as a replacement for Tony Pulis. He was charged with taking Stoke to the next level, building on their status as a solid Premier League side and enabling a style of play that could help them mix it with the big boys. It started well enough, with three ninth-placed finishes in his first three seasons.

With each summer, however, Stoke would twist on the cards they had, attempt once more to upgrade the squad. Hughes’s reputation, at least in part, helped them to attract players who could bring fantasy to the team’s play: first Bojan Krcic, then Xherdan Shaqiri and finally, last summer, Jesé. Hughes signed 33 players permanently during his time at the club and sizeable fees were spent on players such as Giannelli Imbula, Saido Berahino and Kevin Wimmer. None have lived up to their price tag.

Hughes’s record in the transfer market to some extent precedes his time at Stoke. He was the man who signed Robinho for Manchester City, Kieron Dyer, José Bosingwa and Esteban Granero for QPR. But as time went on the transfer policy served not to enhance Stoke’s identity but to muddy it. Stoke under Hughes became neither one thing nor the other and he leaves with that precious Premier League status under severe threat.

With only five league wins this season, Stoke have slipped to 18th place. They have the worst goal difference in the Premier League and have conceded the most, too: 47 goals in 22 matches. There was expensive summer reinforcement in the shape of Wimmer, Bruno Martins Indi and the Chelsea loanee Kurt Zouma but none at wing-back, a new role in the team this season. This lack of defensive resolve has been disconcerting and the clearest break between the Hughes and Pulis era.

At times Hughes has appeared blase about the problems. After conceding in added time against Crystal Palace to lose a game Stoke had been leading, Hughes said his players needed to learn to “put their foot through it” in key moments. This was not something that previously would have needed telling. He has frequently deflected attention from his and his team’s performance by relying on unconvincing excuses. After the 5-1 shellacking at the hands of Spurs, Hughes talked of how “unfortunate deflections” had turned the tide of the game. After Stoke’s 1-0 defeat to Newcastle on New Year’s Day, he was not up for giving any answers at all, walking out of the post-match press conference.

After the Coventry FA Cup tie, Hughes did opt to face the media, admitting Stoke fans were not enjoying what they were watching. “Our fans are good judges of football, they’re not happy with what they’re seeing at the moment,” he said. “Results aren’t good enough. It’s not like I don’t see that either. The players need to be better, I need to be better.”

In the end he did not get the chance to back up those words with actions. Hughes did not deliver the change of identity he was hired to bring to Stoke, despite being given resources many Premier League managers would envy. In truth that challenge might never have been realisable for a club of Stoke’s stature but neither is it the reason he lost his job.

It was Hughes’s failure to organise and motivate the players he had that ultimately did for him and that is a responsibility that falls squarely on his shoulders. – Guardian service