Ken Early: Mohamed Salah is not a truly great winger 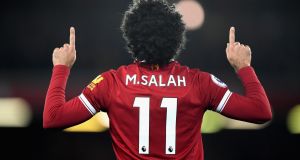 Wide strikers such as Mohamed Salah of Liverpool, above, rarely cross and they shoot at goal as often as traditional centre-forwards. Photograph: Shaun Botterill/Getty Images

Mohamed Salah’s goal against Chelsea meant that he finished the weekend as top scorer in the Premier League. With 10 goals in his first 13 Premier League games, Salah has received general acclaim, with many people remarking that his tally so far is particularly good “for a wide player”.

“You think of the great goalscoring wingers and if he is here for three or four years he’s on the verge of eclipsing them all,” Jamie Carragher told Sky. “Robert Pires, Freddie Ljungberg and Ryan Giggs at times for Manchester United were wide players who made those runs that Salah is making across defenders, running in behind.”

In fact Salah comes out of a comparison with these players well. Giggs struck double figures in the league only twice in 24 seasons, and never scored more than 13. Ljungberg’s best tally was 12, and he hit double figures just twice in nine seasons. Pires was the most consistent scorer, with 14 goals in three consecutive seasons from 2002 to 2004, but few would bet against Salah beating that total. If we correct for the fact that Giggs played more centrally when he got older, we see that he scored a league goal every four or five games from the wing – a similar ratio to Ljungberg. Pires got a goal every three games.

Henry is remembered as Arsenal’s best-ever striker, yet when he joined from Juventus, most people thought Arsene Wenger was signing a left-winger.

Salah has averaged a goal every two league games for two seasons, and his fast start at Liverpool has seen that rise to three goals every four games. Does this mean he is better than Premier League greats like Giggs and Pires? No – it means we need to look a bit more closely at the comparison.

Giggs was no Best

Back in the mid-1990s, when the young Giggs was being hailed as the new George Best, Alex Ferguson told Hugh McIlvanney: “He’ll never be a Best. Nobody will. George was unique, the greatest talent our football ever produced – easily! Look at the scoring record: 137 goals in 361 League games ... phenomenal for a man who did not get the share of gift goals that come to specialist strikers, who nearly always had to beat men to score.”

The last point is key: wingers used to spend most of their time on the outside, with defenders between them and goal, which is why Ferguson considered Best’s scoring record so phenomenal. When you watch Salah’s Liverpool goals, he hardly ever has to beat a man to score. Often he is the most advanced player, arriving at the far post to finish, or following in to snaffle a rebound. The point is that Salah is not really a winger at all. He plays a position that didn’t exist when Best played, and one that didn’t exist even for much of Giggs’s career: the striker who starts on the wing.

Go back to the year 2000 and look at the top scorers’ chart in the Premier League. You will find that almost all the players in the top 10 are centre-forwards: Kevin Phillips, Alan Shearer, Andy Cole, Dwight Yorke, and so on ... There is just one name on the list that does not fit the classic profile of the No 9: Thierry Henry.

Henry is remembered as Arsenal’s best-ever striker, yet when he joined from Juventus, most people thought Arsene Wenger was signing a left-winger. But Henry was always ahead of his time, and in the year 2000 so was Wenger. Together they disrupted traditional patterns of play that had ruled since the 1960s in English football, where full-backs stayed back, wingers stayed wide, and centre-forwards played in the box.

One of the qualities that made Henry different was a degree of speed and athleticism that at that time was unique in English football – and he used this advantage to expand the area of the field in which he played. Traditional centre-forwards had gone to the box and wrestled defenders while they waited for the ball. Henry preferred to drift to the wing, knowing that his markers would not follow him there, and use his speed to arrive in the box unmarked.

Previous generations of strikers would have lacked the speed and stamina to do what Henry did over 90 minutes, but once he had showed the way, other players emerged who could copy his template, most notably Cristiano Ronaldo. Ronaldo, along with Lionel Messi, has dominated the European goalscoring charts for a decade. They both prefer to start from deep, wide positions, so it should not surprise anybody that a “winger” like Salah scores a lot.

Scoring lots of goals used to be the sole preserve of players who could hatch in the box, but now it is about arriving there. If you look at the players who have had most shots in the Premier League, you see that “wide” strikers such as Salah, Alexis Sanchez and Richarlison shoot at goal as often as traditional centre-forwards such as Harry Kane and Romelu Lukaku.

Another point to note about these “wingers” is that they seldom cross the ball. Salah has seven times as many shots as crosses. The true wide players today are full-backs. They are the ones who are most comparable to the wingers of old, to the point where the word “full-back” should be retired as these “backs” actually spend most of their time attacking.

Again this is chiefly the result of the athletic arms race. Twenty years ago it was often argued that 3-5-2 and its variants could not really work because the system demanded too much from the wing-backs, who had to cover the entire flank by themselves. Now the league is full of players who are fit enough to do this, freeing up “wingers” such as Salah, Raheem Sterling or Leroy Sané to get inside and score goals.

The fact that these players are scoring much more than great wingers of the past does not mean that they are much better players. It just means that they are not wingers but strikers, and the way we talk about football needs to catch up with what is actually happening on the field.