Manchester City come from behind to put four past Burnley 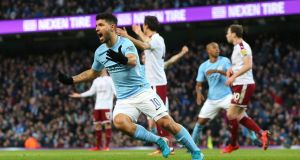 Sergio Aguero struck twice in two minutes as Manchester City came from behind to overpower Burnley 4-1 in the FA Cup third round.

Leroy Sane and Bernardo Silva also got on the scoresheet as City responded impressively to the shock of conceding a half-time lead to Ashley Barnes’ superb opener at the Etihad Stadium.

The comeback, which will only increase talk of a City quadruple bid, was inspired by Ilkay Gundogan, the German setting up Aguero for both his game-changing goals in the 56th and 58th minutes.

City boss Pep Guardiola may have chosen to put Ederson, Kyle Walker and Kevin De Bruyne on the bench, but his team selection showed he still very much means business in this competition.

The Premier League leaders controlled early possession in their usual manner and carved out openings without getting into their full flow.

Sane worked Matt Lowton early and David Silva had an effort blocked by Ben Mee. Aguero also cut into the box to set up David Silva, but again he was thwarted by a defender.

Gundogan fired into the wall from a free-kick and Oleksandr Zinchenko, the young Ukrainian starting at left-back, twice missed the target from distance.

But Burnley were resilient, well-organised and not afraid to forge forward themselves.

Mee caused a scare in the City box when he rose to meet a corner at the back post, but his header across goal evaded everyone.

The Clarets grabbed the lead after 25 minutes when John Stones was dispossessed close to the halfway line and Barnes raced clear. He gave Claudio Bravo no chance with a fierce strike inside the near post as he entered the area.

Gundogan had a good effort blocked by Lowton as City sought an immediate reply, but it was not until the second half that they began to get into top gear.

The turnaround came after City won a free-kick inside the Burnley half.

Gundogan took it quickly having spotted a run by Aguero to the edge of the area. Burnley complained, but referee Graham Scott saw nothing untoward and Aguero wasted no time in rifling home.

Aguero fed Gundogan inside the box and continued his run, with the German reading his intentions and backheeling back into his path. Aguero took it in his stride and rounded Nick Pope to slot home.

City should have had a third goal in quick time after Pope blocked a Danilo shot, but Sane flicked over the rebound from close range.

Sane made amends after 71 minutes, combining nicely with David Silva and skipping a challenge to beat Pope with a low shot.

If City might have thought of easing up, Guardiola was having none of it, sending on Kyle Walker and De Bruyne.

Bernardo Silva wrapped up the scoring after Pope rushed off his line and Sane swerved around him to set up the Portuguese.