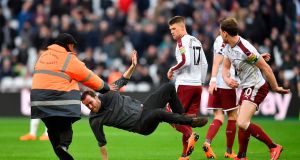 “The people doing it in front of where you are sitting are the ones that really hurt because you can see the hatred in their eyes. You could almost excuse the chants of ‘Board out’ because of their frustration, and they are getting rid of that. If I wasn’t chairman, I would probably be joining them. But, of course, what I wouldn’t be joining in is the venomous verbal attack.”

That was the reaction of then-Birmingham City co-owner David Gold back in 2008, when Birmingham fans greeted the confirmation of their club’s relegation from the Premier League by flooding onto the pitch at St Andrew’s and demanding the departure of Gold and his partner David Sullivan.

While Gold professed to be shocked by the venom of the protesting fans, Sullivan reacted with contempt.

“These people don’t know anything about business and nothing about football. I’ve had enough. I don’t want to be here next season,” he said.

Eighteen months later, Gold and Sullivan had sold their interests in Birmingham and taken over as the controlling shareholders in West Ham in a deal that valued the East London club at £105 million.

At that time, West Ham still played at the Boleyn Ground, which had a capacity of 35,000, and turned over £71 million a year. They now play at the former Olympic Stadium, with a capacity of 66,000, and, thanks to booming TV revenues, turnover for the 2016-17 business year increased to £183 million.

In 2012, Sullivan claimed that taking over West Ham “made no business sense at all,” but given that in 2016 he claimed to have rejected a takeover bid of £650 million from Red Bull, the takeover does ultimately seem to have made a certain kind of sense.

The Sunday Times rich list last year estimated Sullivan’s fortune at £1.1 billion, and Gold’s at £460 million, with their holdings in West Ham accounting for £600m+ of their combined wealth.

Yet it seems supporters feel that Gold and Sullivan have done rather better out of the deal than the club has. The anger animating the fans that approached the directors’ box to hurl abuse and projectiles at the owners on Saturday is rooted in a feeling that West Ham are, in some fundamental sense, no longer West Ham.

One of the many supporter grievances concerns the new club crest, introduced last summer, which removed the so-called Boleyn Castle and added the word “LONDON” underneath the traditional crossed hammers.

The board’s idea is obviously to transcend West Ham’s parochial East London origins and stake out a new role as a global club in a global city, much as the Qatari owners of PSG have moved the word “PARIS” to the top of their new club crest, and relegated the arcane “Saint-Germain” bit to the small print.

Naturally, many West Ham fans are rather attached to those parochial East London origins, and the new crest crystallises the sense that the club has lost its identity since moving to the big athletics stadium in Stratford.

Matches at the Boleyn Ground might have been difficult to get to on public transport, but it had its own unmistakable character – the asymmetric stands, the tower blocks looming over the pitch. Transport links to Stratford are better, but to walk around the desolate concrete concourses that surround the stadium is to feel you could be anywhere at all. Even the name “London Stadium” is dismally blank and featureless.

But if Gold and Sullivan are determined that West Ham are now London rather than merely East London, there is no such clarity about what kind of team they would like to see on the field. Their coaching hires reflect that uncertainty.

Founded in 1902, West Ham had eight managers in the 20th century. They are now onto their eighth manager of the 21st. Gold and Sullivan have appointed four of those in the last eight years: Avram Grant, Sam Allardyce, Slaven Bilic and now David Moyes.

It’s difficult to divine any thread that connects these four names, any pattern that suggests Gold and Sullivan actually know what they are looking for in a football manager.

Grant was unpopular with fans and unsuccessful on the field, with West Ham relegated in May 2011. If that first hire was one that nobody could have seen coming, the next was pretty much the opposite; Sam Allardyce is the classic conservative choice for English football club owners seeking a safe pair of hands.

But Allardyce’s conservative style led to a culture clash with the West Ham fans, who craved the excitement that only a real West Ham man like Slaven Bilic could bring.

Gold and Sullivan seemed to bow to popular pressure by appointing Bilic in 2016, but as time went by it became apparent that he lacked many of Allardyce’s organisational skills. Bilic was eventually sacked after a bright start petered out into more than a year of desperate, directionless football.

The appointment of David Moyes, an unpopular choice after failed stints at Manchester United, Real Sociedad and Sunderland, looked almost like the owners’ revenge on the fans for pressuring them into hiring a cult hero the last time around.

It’s no surprise that the squad Moyes has been left with following this chaotic series of appointments is a random jumble of spare parts. Nobody knows what kind of viable football machine they can be assembled into. There might be a winning combination there somewhere, but there are not many games left to find it, and four of the eight matches remaining are against sides in the top six.

Maybe a director of football with a vision of how the club ought to play could have imposed some structure and stability on West Ham’s recruitment, but the vision thing is not Gold and Sullivan’s forte. It’s plain that the owners know a thing or two about how to make money, but they seem to know no more about football than the Birmingham fans Sullivan derided ten years ago.

Gordon Elliott backs decision to end jumps season but rues lost opportunities 18:30
America at Large: On Long Island, longing for a return to our field of dreams 18:00
Fairyhouse and Punchestown festivals cancelled as National Hunt season ended 17:48
Wimbledon will not be held this year due to coronavirus crisis 16:51
Playoffs set to be moved again as Uefa prioritise European club competitions 15:59

1 America at Large: On Long Island, longing for a return to our field of dreams
2 Garry Ringrose to stay with Leinster as he signs two-year central contract
3 ‘For 25 minutes I ran out of oxygen’: Pepe Reina on his coronavirus battle
4 Fairyhouse and Punchestown festivals cancelled as National Hunt season ended
5 Wimbledon will not be held this year due to coronavirus crisis
Real news has value SUBSCRIBE
Crossword Get access to over 6,000 interactive crosswords