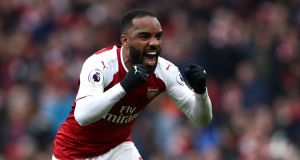 When you are down at the bottom, there is a creeping inevitability that the breaks will go to the opposition. This was Stoke’s lament. They had held their own at a typically nervy Emirates Stadium until Bruno Martins Indi stretched into a penalty box challenge on Mesut Özil.

It looked clumsy and a little risky as the Arsenal midfielder had worked the position on him but TV replays confirmed that Martins Indi had got a toe to the ball. Craig Pawson’s penalty award felt like a kick to the guts.

Stoke have only ever tasted defeat at this venue – their last away win over Arsenal came at Highbury in 1981 –and Pierre-Emerick Aubameyang set in motion the latest reverse when he converted the penalty.

Aubameyang would add a lovely second before the substitute Alexandre Lacazette’s penalty gave the scoreline a gloss that had not looked likely at half-time when Arsenal were booed off.

Arsenal had been dreadful in the first half and it was easy to think that they had their minds on Thursday night’s Europa League quarter-final, first leg here against CSKA Moscow. Stoke scented a valuable point, at least, in their relegation battle.

But the roof fell in on them after the first penalty. Their lack of goals remains a huge concern – it is now four in eight games for them.

Arsenal’s preoccupation with the Europa League was reflected in Arsène Wenger’s line-up and by that in the stands. There had been almost a full house for the second leg of the Milan tie in the last 16 of the European competition but on Sunday there were thousands of empty seats. It had been the same story for the previous home league fixtures against Watford and Manchester City.

Arsenal’s league season has long since fizzled out but this match represented one of seven shots at salvation for Stoke. It is the time of the year when frazzled fans scrutinise the run-ins and permutations and Stoke must be looking at West Ham, Swansea and Crystal Palace as must-wins. Against opponents with another priority, they had dared to dream of a bonus.

Stoke have tightened up under Paul Lambert and his two banks of four were typically committed and well-drilled. Could they find cutting edge in the final third? Everybody connected to the club has known that this has been an issue over recent weeks.

Lambert is one of the more expressive managers in English football and he went through agonies on the touchline as his team worked a few promising breaks in the first half only to miss the final pass or dribble. Xherdan Shaqiri, in a roaming central role, tried to make something happen and he bent a shot narrowly past the far post on four minutes. Joe Allen also caught the eye with his skills in tight areas, passing and pressing.

Arsenal were jeered at half-time. Their performance had been lethargic, scarred by sloppiness and lacking any structure in attacking areas. In the 41st minute, they managed to work the ball back to the goalkeeper, David Ospina, from deep inside the Stoke half, which led to predictable frustration.

Ospina had started in place of Petr Cech, who had a minor groin injury, although the decision also gave him a run-out ahead of the CSKA tie, which he was always going to start. Wenger left Laurent Koscielny, Granit Xhaka and Henrikh Mkhitaryan out of the starting XI with an eye on Thursday.

Aaron Ramsey provided a rare moment of class on 24 minutes when he worked a deft chip on the run against the top of the crossbar after Jack Butland had failed to deal with a high ball while the midfielder had another shot blocked. Incredibly, he heard taunts from the Stoke support that related to the horrific leg break he suffered against them in 2010.

Arsenal sparked towards the end, with the introduction of Lacazette on 61 minutes providing some of the impetus. It was his first action since mid-February and knee surgery and he took up the central striking role, with Aubameyang moving to the left.

Mohamed Elneny had seen a shot blocked by Martins Indi in the 59th minute, following Hector Bellerin’s cut-back, and it might have been different had Shaqiri’s inswinging corner gone in off the far post rather than bounced away.

Arsenal turned the screw. Butland denied Aubameyang one-on-one after Ozil’s through-ball and Calum Chambers could not finish from a corner when well-placed yet it still took the first penalty award to break Stoke.

Thereafter, it was worrying to see how they folded. Ramsey rounded Butland but could not convert; the goalkeeper blocked from Mkhitaryan and then punched clear from Özil. From the corner, after the ball broke to Aubameyang, he cut across his shot beautifully to send it screaming low past Butland.

The second penalty salted Stoke’s wounds. Badou Ndiaye’s barge on Lacazette was robust and needless and the Arsenal player accepted the invitation to go down. He picked himself up to slot the kick past Butland. – Guardian service