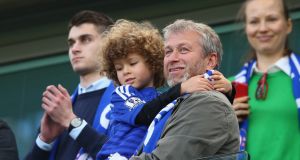 Chelsea owner Roman Abramovich. When an oligarch-owned club like Chelsea sets new benchmarks for fees and wages, the other clubs are forced to “get rich or die trying” if they want to compete. Photograph: Clive Mason/Getty Images

Football has been transformed over the last 15 years by an influx of wealthy owners. Has this trend left the sport in a better place?

A new book by James Montague, The Billionaires’ Club, seeks to understand why the global super-rich suddenly became interested in football, and what the consequences of this trend have been.

It turns out that just as the source of most billionaires’ fortunes can be traced to political events or manoeuvring, most of them have got involved in football for political reasons.

For post-Soviet oligarchs like Roman Abramovich at Chelsea and Alisher Usmanov at Arsenal, the purpose has been to honour the time-honoured tradition of moving assets out of their home country, and to establish a foreign bridgehead as insurance against future political setbacks.

There are few better ways of becoming well-known in a new country than to buy a major football club: millions of English people now know Abramovich not as the predatory operator who managed to obtain ownership of a vast chunk of the old USSR’s oil wealth, but as the benign playboy dreamer who spent £50 million on Fernando Torres in the hope of making Chelsea exciting to watch.

PR is also part of the calculation for the multi-billionaire petro-dynasties of Qatar and the UAE.

These countries, where “everything is given, nothing is earned”, see themselves as the victims of the jealousy of the West, which hypocritically criticises them for such human rights abuses as the kefala labour system by which poorly-paid migrant workers from Asia do most of the essential work in their wealthy economies.

Part of the solution, as outlined here, is to buy up trophy assets in the West, whether they are prestige department stores or banks or football clubs like Manchester City or Paris Saint Germain.

A lot of people like football and if you can do something good for their football club they will like you. Qatar also won the bid to host the 2022 World Cup, though this soft-power move has arguably backfired, with the award of the World Cup bringing further unwelcome attention on the system by which Qatar exploits migrant labourers.

Less popular than the sheikhs are the Americans, who come not as rich men who want to have some fun with their money, but as rich men whose aim is to get even richer. They come from the cosseted professional sports industry in the US, which to a startling degree is organised around the transfer of public wealth to private hands in the form of taxpayer funding of stadiums, while the leagues themselves are effectively cartels.

They expect to be able to replicate this profitable arrangement in the more competitive economic environment of European football.

So far only the Glazers at Manchester United have had any real success, and that was because they took over a team that was already the richest in its league and winning everything in sight.

Tom Hicks and George Gillett nearly sank Liverpool, while Stan Kroenke has become as unpopular at Arsenal as he is in St Louis, where he was the reviled owner of the Rams franchise before moving it to Los Angeles.

“At least the slave-owning emirates and the mob-tied Russian billionaires spend money on their club to get results” one fan in St Louis tells Montague. “The man [Stan Kroenke] ripping apart the fabric of America with Wal-Mart is doing nothing for his team.”

That quote goes to the heart of the matter as far as fans are concerned; if the owner puts money into the team, they do not really care where the money is coming from. There have been no protests at Chelsea or Manchester City against Abramovich or Sheikh Mansour, while Liverpool fans only started to protest against Hicks and Gillett when they cut off spending on the team.

The Glazer takeover at Manchester United caused immediate uproar, but only because their highly leveraged takeover was so clearly going to be a drain on a club which was already doing well as a plc.

Montague demolishes the argument that billionaires getting involved is essentially good for football because they are putting money into the game. The basic problem is that sugar daddy-owned clubs have massively accelerated the rate of inflation.

When an oligarch-owned club like Chelsea sets new benchmarks for fees and wages, the other clubs are forced to “get rich or die trying” if they want to compete. The cost of the inflationary spiral ultimately falls on supporters, who are forced to pay more for tickets and TV subscriptions.

Most takeovers by wealthy owners end in failure. This invariably creates bad feeling among supporters who find their club – a central part of their culture – relegated to the status of a toy some rich guy has got bored with.

The common theme, whether it’s Thaksin Shinawatra at Manchester City or Mike Ashley at Newcastle United, is resentment at the basic injustice of a system which allows one person to take over an institution that is vastly more important to thousands of other people than it is to them, exploiting their new status for a temporary ego trip, and then losing interest and letting the club slide into neglect.

You can only guess to what extent the resentment of hundreds of thousands of football fans plays into the nativist currents sweeping Europe. Just as owning a successful Manchester City or PSG boosts the image of the wealthy Gulf states, the mismanagement of clubs like Den Haag or Cardiff does little to inspire trust in foreign capital.