Klopp’s side win 4-0 at Anfield but it could have been much, much worse for Arsenal 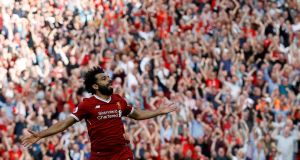 Three games into a new season, these are the moments when the many people who hoped Arsène Wenger might guarantee himself a happy ending are entitled to say they did warn of the dangers. Arsenal, once again, are lurching towards another of their now-familiar crises and perhaps the most worrying part is that it all feels so predictable.

The deficiencies Liverpool exposed here have worried Arsenal fans for longer then they will care to remember. It was all the old shortcomings, all the problems that should have been addressed a long time ago but now feel intrinsically linked with the latter part of Wenger’s fading reign. Liverpool were a class apart and, if anything, it was surprising they restricted themselves to only four goals. Arsenal - weak, rudderless, anaemic - were not a great deal worse the time they let in eight against Manchester United.

This was another humiliation and by the time Mohamed Salah had sprinted half the length of the pitch to stroke in the third goal Alexis Sánchez was down on his haunches by the left touchline, lost in his own thoughts, cut off from the rest of his team-mates with his body language telling its own story. That goal had originated from an Arsenal corner and, not long afterwards, there were boos from the away end when Wenger appeared by the touchline. The danger for Wenger is that this could be the soundtrack to his season unless something dramatically changes.

Perhaps they were a little unlucky to come up against a Liverpool side playing at the point of maximum expression but, unfortunately for Arsenal, these are the occasions when we are reminded why two of the players in their starting line-up, Sánchez and Alex Oxlade-Chamberlain, would rather be playing elsewhere and a third, Mesut Özil, is guilty of leaving the same impression.

Arsenal have now lost nine of their past 14 away games if the travel sickness that afflicted them last season is also included. Wenger’s team took only nine points from their 10 games against the other top-six sides last season and, with absolutely zero signs that it is getting any better, it would be madness on this evidence to think Arsenal will be anywhere close to challenging for the title this season. Liverpool can think much more optimistically, especially when Sadio Mané, Roberto Firmino and Salah are playing with this kind of attacking penetration. Liverpool without Philippe Coutinho have been portrayed in some quarters like a flower without sunlight. It simply isn’t true.

Where to start? As tragicomedies go, it doesn’t get much better than Granit Xhaka trying to back-heel the ball to his own goalkeeper and putting it out for a corner. There was the attack when Georginio Wijnaldum beat Aaron Ramsey, then went back to do it again. Or how about the moment Rob Holding had a simple pass out to Oxlade-Chamberlain on the right and could not even get that right? Holding missed his team-mate by several yards and gave away a throw-in. Holding is out of this depth at this level and opponents have worked that out. He looked shot to pieces before an hour had been played and, for his own sake, he could probably do with a spell out of the team.

Liverpool took a while to realise their opponents were there for the taking but once Firmino headed them into a 17th-minute lead it was startling to see the imbalance between the two sides. Jürgen Klopp’s men swarmed all over a team that has now lost two of their opening three league fixtures for only the third time in 26 years. Ramsey was removed at half-time. Özil has never been a chaser of lost causes and Oxlade-Chamberlain made it feel laughable he is the subject of €38 million bids and a €195,000-a-week contract offer. Is he really worth it? His afternoon here ended with a substitution and the sight of him throwing his tracksuit top on the floor.

Mané’s goal to make it 2-0 was just one of countless occasions when Holding’s vulnerability was shown up. Joe Gomez, Liverpool’s young right-back, started the counter-attack from inside his own penalty area. The referee, Craig Pawson, played advantage when Xhaka fouled Wijnaldum and within moments Liverpool had swept upfield, Firmino’s pass had left Mané with the chance to take on Holding and Petr Cech was picking the ball out of his net.

Gomez had also been involved in the first goal, delivering the cross for Firmino to score with an unchallenged header. Héctor Bellerín had lost the ball on the right and it was the same Arsenal player who gave away possession when Salah chased him down and then ran away to turn an Arsenal corner into a Liverpool goal in the 57th minute.

Arsenal will not even wish to contemplate what the score might have been if Cech had not made several splendid saves. Loris Karius, in stark contrast, must consider Arsenal were obliging opponents on the day Klopp made the unorthodox decision to “rest” Simon Mignolet, leaving his usual number one out of his squad. Karius still had some awkward moments, twice chased down by Danny Welbeck with the ball at his feet, but he did not have to make a single noteworthy save and when the substitute Daniel Sturridge headed in Salah’s cross it was the 17th goal Arsenal had conceded in their last five Anfield visits.

Liverpool had outclassed them in every department, from A to Z.